In Missouri’s bicentennial year, Missouri Folk Arts will share 200 stories over the course of 52 weeks in 2021 about the folk and traditional arts in the Show Me State.

If there’s one thing Mike Massey knows, it’s preserving tradition. Mr. Massey took the practical knowledge he learned from his grandfather and applied it to repairing old saddles, dissecting them to learn how to put them back together better. Even as a well-established leatherworker, Massey saw the need to refine his craft, and participated in the Traditional Arts Apprenticeship Program as an apprentice to legendary Martin J. Bergin. Five years later, Massey taught his own apprentice in the program. Check out this edited interview with Massey discussing his TAAP participation.

Via his shop M bar S Ranch Gear in Montgomery City, Massey crafts and sells a wide range of leather goods, from saddles, holsters, and sheaths to purses and guitar straps.

Johnny Ray Bruce (1939-1992) was born to play fiddle, hailing from a musical family and learning fiddle at age nine. He is another prolific teacher, who falls into our “Master Artist; Master Teacher” category, one of those traditional artists who lead five or more apprentices in Missouri’s program. Mr. Bruce had quite the run in TAAP, teaching apprentices six years in a row between 1986 and 1991. There’s little doubt that for a tragic car accident, he would have continued to lead apprenticeships for many years.

Dubbed the “Carroll County Fiddler,” Mr. Bruce was dedicated not only to passing on but to “keeping alive the art of old-time fiddling.” He competed often in fiddle contests at the state and national levels, and was respected enough to judge those competitions, too. In the link below from 199, Bruce plays three tunes at the annual fiddle contest that wraps up the week of Bethel Fiddle Camp. He is backed on guitar by Kenny Applebee and Wes Brown.

John Wynn (1938-2010) credited a Navy buddy who taught him a few chords as the one who provided the spark that led to a career defined by music. Mr. Wynn was born in California, but his roots were in the Oklahoma Ozarks. Eventually, he settled in Ozark, Mo. to raise a family and start a family band with Betty, his wife. In addition to his cabinet making business, he was experimenting with instrument-making.

Eventually, John Wynn was known in bluegrass circles and beyond for his luthiery skills in crafting mandolins and banjos. The International Bluegrass Music Association recognized his influence and inducted Wynn as a Pioneer of Bluegrass.

Over his career, Wynn built well over 200 (each) mandolins and banjos. They were, and remain, highly-sought after instruments. Wynn was one of six luthiers featured in Missouri Folk Arts’ 2006 traveling exhibition, Work is Art and Art is Work.

In a 2007 State of the Ozarks blog post, Joshua Heston wrote about Wynn and his life as a luthier.

Old-time fiddler Jake Hockemeyer grew up in Mokane, a small community in the central Missouri region dubbed “Little Dixie” due its cultural ties to Virginia, Kentucky, and Tennessee. [A short essay on the Missouri Traditional Fiddle & Dance Network website defines the region and discusses the early influence of African-American fiddlers on the region’s old-time music: https://mofiddledance.org/…/african-american-fiddlers…/]

In an engaging biographical profile by Dr. Howard W. Marshall, he describes Mr. Hockemeyer’s influences, contributions, and devotions in the old-time fiddling community, including as a successful contest fiddler. Hockemeyer was so well regarded by his friends and fans, they honored him by re-naming the annual “Mokane World’s Fair” fiddle contest in his honor.

Check out Dr. Marshall’s profile, which also includes audio links to some popular regional tunes that were recorded in 1965. https://mofiddledance.org/profiles/jake-hockemeyer/

Gene Goforth (1921-2002) is another one of those particularly influential Missouri fiddlers. Born in Shannon County in a family with deep musical roots and branches, he was a precocious old-time fiddler who was playing dances at eight years old. As an adult, he lived in metro-St. Louis, working as a heavy equipment operator while still playing music socially–and later as a bluegrass touring artist. Popular musician John Hartford regularly joined Goforth and friends to play for fun in picking circles; Hartford backed Goforth on banjo, as seen in the YouTube video below, shared by one of Goforth’s nephews. https://www.youtube.com/watch?v=YPpNEywlEh8

Mr. Goforth also influenced Matt Wyatt (of Wyatt Violin Shop in Independence) who taught the younger fiddler during two stints of the Traditional Arts Apprenticeship Program in the nineties. Goforth was recorded by the Missouri Cultural Heritage Center; the Missouri State Old Time Fiddlers Association (available for download at bandcamp); and by Mark Wilson for Rounder Records, among others.

In the meantime, here’s a 1978 documentary with KC’s Jay “Hootie” McShann, the recipient of both a National Endowment for the Arts Jazz Masters award (1987) and an Arts Award from the Missouri Arts Council (2003), among many other acknowledgements.

In just the very second year of the Traditional Arts Apprenticeship Program, Joe Thomas (1909-1986) joined the project to share the decades of knowledge that he had gained in a professional career as a tenor saxophonist (and vocalist and band leader) from the 1930s on. When he eventually settled in Kansas City, Mo., he retired from touring to run the Bruce R. Watkins Funeral Home and lead the choir at his church.

The family of Mr. Thomas had the forethought to donate his extensive collection of correspondence, news clippings, musical scores, song books, photographs and more to the University of Missouri-Kansas City in 1997. https://library.umkc.edu/archival-collections/thomas#

Jazz fans are lucky, too, that various entities have digitized film from Thomas’s years with Jimmie Lunceford Orchestra. Check out this video of “Rhythm is Our Business” that includes a tenor sax solo (1:05) by Joe Thomas. Then, go down that YouTube rabbit hole listening to Thomas play in various bands, including his own.

KC MO’s son Ahmad Alaadeen (1934-2010) grew up falling in love with all kinds of music. He debuted as a saxophonist at age 14; he played, too, in high school, college, and the Army. Ultimately, he spent six decades bringing jazz to life. Alaadeen dedicated his life to music, taking the stage on sax (as band member and band leader), recording jazz standards and his own compositions, and sharing his knowledge about the tradition in innumerable venues. Alaadeen taught in apprenticeships, schools, and with a final project–his own method manual “The Rest of the Story: Jazz Improvisation and History.”

Like Joe Thomas, Alaadeen’s family conveyed his collection of manuscripts, cassettes, reels, and video tapes to the University of Missouri-Kansas City. Victoria “Fanny” Dunfee, his widow, ensured that the collection was deposited for posterity at UMKC Library’s LaBudde Special Collections and Marr Sound Archives.

While jazz trombonist Earlie Braggs might have left KC MO for Ohio a while ago, he’s still deeply connected with the our state’s jazz tradition, returning periodically to perform. At this link (click to see image) from the UMKC Digital Special Collections, we see him performing a couple of decades ago with his apprentice Tim Perryman, as well as with Alaadeen and several others at The Blue Room. https://dl.mospace.umsystem.edu/…/object/umkc%3A27106

Even more recently, we find him performing with the The Kansas City Jazz Orchestra even last year in a pandemic virtual performance of “Solitary Confinement.”

Check that May 2020 virtual performance here. Someone did a great job editing these individual videos together!

Carmell Jones was born and raised in Kansas City, KS, started playing piano at five and trumpet at seven, but spent his time on the Missouri side as a jazz trumpeter. He attended college, then served a stint in the military before relocating to the West Coast and then Germany, where he lived fifteen years.

Around 1980, Mr. Jones returned to KC, MO where he taught jazz in the schools and gigged around town, including with David Basse, Ahmad Alaadeen, and the City Light Orchestra. Jones is consistently noted as an exceedingly good “hard bop” trumpeter. Sadly, he died young at age 60 in 1996.

Check out Carmell Jones in a performance with friends in Germany from 1979.

Mae Wheeler (1934-2011) was by all accounts a local celebrity–a jazz vocalist, or as she preferred “song stylist” and “cabaret singer.” Born in Memphis, she migrated north to St. Louis with her parents and siblings at just five years old. Biographies about Lady Jazz note that while she did not record or tour much, she, with the signature flower behind her ear, was a St. Louis institution, performing regularly around the city at numerous venues.

Here’s a tribute from Arts and Education Council – St. Louis in honor of her Lifetime Achievement in the Arts, including her generosity in fundraising for scholarships.

Don Epperly (1942-1996) worked as a greenhouse grower as his primary occupation and pursued leather working as an avocation. In 1988, he taught leather braiding to two apprentices in TAAP and was actively involved in the Federation of Leather Guilds as both a competitor and during that time as an officer in the guild locally.

Previous staff member Keith Frausto captured the photo below of Mr. Epperly (left) in his workshop in November 1987 during a site visit. [Photo from Missouri Folk Arts’ archives]

Mr. and Mrs. Cox of Bowling Green were rather unique in the Traditional Arts Apprenticeship Program, as rather than a single master artist, this couple team-taught their apprentice how to cane chairs. For the Coxes, reweaving chair seats was a hobby that they acquired over the years by observing and practicing with other caners, as well as seeking out instruction via books and videos to refine their skills. Their primary goal was to help their clients restore family treasures, and they also spent time at festivals and fairs, like the annual Heritage Festival and Craft Show each fall in Columbia.

In the photo below, we see Mr. and Mrs. Cox demonstrating the tradition for audience members during the Missouri Folk Arts Program’s presentation at Boonville’s Big Muddy Folk Festival in 2004. Photo credit: Deborah A. Bailey

Helen Jeffrey, then of St. Louis, was a master of rug braiding and hooking. In 1988, she worked with her apprentice Jean Ameduri, a talented needleworker in her own right—especially in quilting. Mrs. Jeffrey later relocated to Ozark, Mo., and still found time to teach rugbraiding workshops in the region, favoring simple methods, very few tools, and wool to make beautiful functional floor coverings. We learned that Mrs. Jeffrey passed away in 2020 at age 97, and we were touched to read a note from a relative who wanted to make sure her cousin was remembered for being a “creative and patient teacher” of rug weaving.

In the photo below, previous staff member Keith Frausto documented a lesson during the 1988 apprenticeship with Helen Jeffrey (left) working side-by-side with Ms. Ameduri. 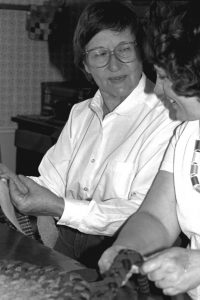 Joe Patrickus, II (1947-2018) made a home for his family in Macks Creek and, in Camdenton, a home for his custom boot business Two Heel Shoe Repair dba JP’s Custom Handmade Boots LLC. He was fond of using regional and exotic materials in his finished product and always paid very close attention to detail, down to the wooden lasts around which his boot were shaped. Turning lasts was one of his signature traditions, even when other bootmakers moved to using plastic.

Joe Patrickus served as a master artist to many apprentices, among them his son and daughter, who carry on their family tradition. Joseph Patrickus, III makes the boots and accessories now, doing his dad and everyone proud.

We still miss JP’s 5 p.m. Friday calls to the office. Learn more about Joe and Joey at the link. https://www.lakenewsonline.com/…/family-tradition-jps…

200 Stories, June 2021 #ShowMeFolk #200Stories #Missouri2021 #Missouri200 In Missouri’s bicentennial year, Missouri Folk Arts will share 200 stories over the course of 52 weeks in 2021 about folk and traditional arts in the Show Me State. We…

200 Stories, May 2021 #ShowMeFolk #200Stories #Missouri2021 #Missouri200 In Missouri’s bicentennial year, Missouri Folk Arts will share 200 stories over the course of 52 weeks in 2021 about folk and traditional arts in the Show Me State. We…