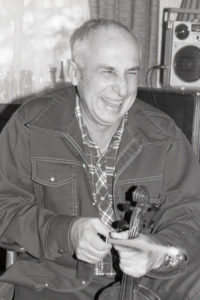 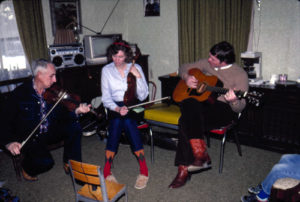 Johnny Ray Bruce was born April 28, 1939 and as an adult lived about a mile outside of the small town of Bosworth, Missouri, in Carroll County. He made a living as a “dirt farmer” and a welder and ran a business with a cousin laying field tile. Mr. Bruce came from a musical family; his father, Tyson Bruce, was a well-known square-dance fiddler.  Johnny began playing the fiddle at age nine. He credits his father and an uncle, Dewey “Dude” Bruce as musical influences, as well as friends, radio, and recordings.

Mr. Bruce made many friends as a contestant and judge in state and national fiddle competitions, as well as through his teaching in places like the Bethel Fiddle Camp and through TAAP.  He played for “enjoyment, money, making people happy and most of all, hopefully passing on and keeping alive the art of old time fiddling.”

Bruce recognized that enjoyment is intrinsic to learning the instrument, as noted by folklorist Margot Roberson in 1986.  She observed Mr. Bruce “doesn’t believe in the easy-to-difficult approach . . . they pick a tune [the apprentice] likes or they both like, and, difficult or easy, she learns it.” He was particularly interested in teaching his apprentices the subtleties of good playing. Outside evaluator, James M. Shirky, observed during a TAAP site visit in 1987, “Not just once, but several times, Johnny Bruce noted that ‘John Q. Public’ wants ‘show tunes,’ a lot of elbow action, burning up the strings – effect instead of essence.”

In a letter to MFAP in 1990, apprentice Robert Patrick (who was also a master blacksmith with TAAP) said, “I am really happy with what I learned from Johnny.  He doesn’t realize how much he inspired me and helped me & the tunes have stuck–I am getting better at them all the time.”

Johnny Bruce died in a car accident in the summer of 1992 at the age of 53.  In an obituary in the Daily Democrat, folklorist, fiddler and former director of the Missouri Cultural Heritage Center Howard Marshall had many warm recollections of Mr. Bruce:  “He had a character that people really enjoyed, and he put Carroll County on the map.” Mr. Bruce’s wealth of knowledge and openness to sharing that knowledge were evidenced by another of Marshall’s comments: “’When a person like Johnny dies, it’s like when a library burns down.’”

Audio clip: As part of their participation in TAAP, Johnny Ray Bruce recorded his lessons with apprentice Holly Gorsett. Many tapes from these lessons are archived at the Western Historical Manuscript Collection at the Missouri State Historical Society in Columbia, Mo.