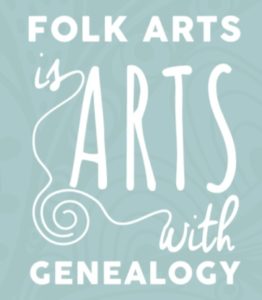 Ahead of the U.S. Bicentennial in 1976, the National Endowment for the Arts seeded folklife programs across the country, leading to our folk and traditional arts program anchored at the University of Missouri.

In Missouri’s own bicentennial year, stay tuned to Missouri Folk Arts’ social media, where staff will share 200 stories over the course of 52 weeks in 2021 about folk and traditional arts in the Show Me State. Enjoy the linked infographic video from the NEA, showcasing the folk and traditional arts across the U.S., including Missouri: The National Endowment for the Arts & Folk and Traditional Arts

In June 1983, Bess Lomax Hawes, then-director of Folk Arts at the National Endowment, announced a state folk arts apprenticeship pilot program and sent out a call for grant applications to state arts councils.

In its first year, the Folk Arts Apprenticeship Program (as it was known then and coordinated by folklorist Barry Bergey) focused on Missouri’s musical traditions and sponsored ten apprenticeships in old-time fiddle, African American gospel, button box accordion, and Kansas City Jazz violin.

Follow this link to read In Good Hands: State Apprenticeship Programs in Folk & Traditional Arts, a 1996 publication from the NEA. A chapter called “Focus on Missouri” starts on page 14, with photos and quotations from teams practicing African American jazz tap, Irish music, and johnboat building: https://archive.org/details/ingoodhandsstate00auer/mode/2up

The Missouri Arts Council, a division of the Office of the Lieutenant Governor, has been a dedicated funder and partner of folk and traditional arts in Missouri for decades.

The Missouri Folk Arts Program traces its organizational roots to the all-volunteer non-profit organization Missouri Friends of the Folk Arts, founded in the seventies by a cadre of Washington University college students, and to the Missouri Cultural Heritage Center, an interdisciplinary research project at the University of Missouri-Columbia from 1982 – 1992.

Since 1993, the folk and traditional arts’ core has been sustained as a program of the Missouri Arts Council and the Museum of Art and Archaeology at the University.

We have 196 additional stories planned for 2021, this Bicentennial year—just a fraction, even while new stories unfold.

Mrs. Frazier toured the U.S. as a gospel singer, recording four albums and appearing on an array of TV broadcasts. Yet, she still returned home to her tight-knit countryside community, Westland Acres, to sit among the familiar faces at the Union Baptist Church. The property of freed slave, William West, remains a haven for Frazier’s family and, hopefully, future generations to come. https://westnewsmagazine.com/2019/01/07/104592/life-on-the-hill-one-familys-legacy-one-womans-commitment-to-westland-acres?fbclid=IwAR0WJQwFP9drcsUiHYNRo1T-qTLmUfS0LeOo_ISjQ1SWqPfHh4-50GkfuRo

Listen to some of Mrs. Frazier’s hits from the 1975 album, “What We Love We Share Together” here: https://www.youtube.com/playlist… 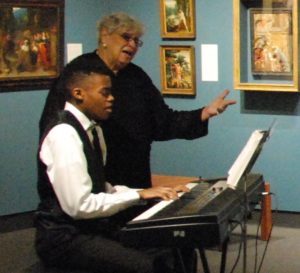 Mr. McBaine, Old-Time Fiddler, worked in many fields as a young man, including truck driving and coal mining. Later, he hired on as an electrician at the University of Missouri, a position he held until retirement. During his spare time, he spent time playing the fiddle, performing in an array of venues in Missouri and beyond, all the while spreading the love of traditional fiddling to younger generations.

Learn more about Mr. McBaine in an essay by Dr. Howard W. Marshall at the Missouri Traditional Fiddle and Dance Network here: https://mofiddledance.org/profiles/taylor-mcbaine/?fbclid=IwAR0tT0xXANoeEh9SM06umch6gVfqwyYhRka7cDqmF3XvK_YTN644_qBTZF4.

Thanks to documentation and digitization by old-time Missouri fiddler Charlie Walden, you can watch Mr. McBaine perform in the 1983 Missouri State Fiddling Championship here: https://www.youtube.com/watch?v=d6D3iMa5auU

To say music is important to Old-Time Fiddler, H.K. Silvey, would be an understatement. Mr. Silvey developed a love for fiddling, hearing live music almost daily at social events growing up in Ozark County, Missouri. He made many geographical moves throughout life, specifically one that led him to Louisiana where he worked to send men to the moon with Boeing. Even then, Silvey found himself in bars playing his fiddle for stress relief! After the project’s success, Silvey returned home, where he picked up his fiddle with friends in a band, and never put it down again. For the full story, check out Kaitlyn McConnell’s profile of Silvey at the Ozarks Alive blog.

To learn more and to hear H.K. Silvey’s fiddling, visit the Field Recorders’ Collective website, for tunes Jim Nelson recorded in 2015, released by the Collective in 2020. https://fieldrecorder.org/…/h-k-silvey-fiddling-from…/

Donivan Bailey wore many hats as a jazz percussionist: as the head of his own ensembles, a freelancer, and a trusted sideman for renowned KC Jazz musicians, like Lonnie McFadden and the late Alaadeen.

Mr. Bailey passed away unexpectedly in 2016, leaving behind a remarkable, though short, career in jazz and a legacy that extends him as a founding member of the popular a cappella group, measureXmeasure (measure by measure). Bailey’s music can be found in the corners of the internet, often off camera, providing rhythm–a treat to those who knew him and those discovering who he was. In the link below, Bailey sings the jazz standard “That’s All” at the Phoenix Jazz Club.

For an extended drum solo, check out this video from Lonnie McFadden’s performance of “Oye Como Va” at the Phoenix Piano Bar in KC, Mo.: https://www.youtube.com/watch?v=68_BANElrNY

For a photo tribute shared at Donivan Bailey’s homegoing, follow this link: https://www.youtube.com/watch?v=FR5gFK_1tLI

Ten-time TAAP master artist Richard Martin, nephew of world-renowned dancer Josephine Baker, had tap dancing in his blood! His formal career in tap began at age four, and he would continue to dance and pass on his love of tap to St. Louis youth, founding a non-profit organization called the Children’s Performing Arts Academy. Mr. Martin also spent much of his life selflessly dedicated to preserving the memory of his aunt, Josephine Baker above his own fame. Nonetheless, Martin lives on in memory as a master dancer and instructor in the greater St. Louis area.

Read more about Mr. Martin in the profile on our website: https://mofolkarts.missouri.edu/exhibits/richard-martin/?fbclid=IwAR03oo5kjPXr2ZAKSVQfPOjYqC0vUQUu4Y9bXqKENZ6cELCSZEwHi0hqEMU

Read more about his dedication to his Aunt Josephine Baker’s legacy in this 2006 story: https://www.foxnews.com/…/0,4675,JosephineBaker,00.html

Mulu Wani, master “Kore” drummer, taught three apprentices this style traditional to the Kuku people of South Sudan. Mr. Wani fine-tuned his skills and traditional knowledge when he and his peers spent time dancing in their Kenya refugee camp during a period of war in Sudan. Because the Kuku people were a smaller group compared to other tribes, “Kore” drumming, and dance, reminded people who they were and kept their hopes up during the time when they were confined inside their camp. Now, he and his community are resettled in Kansas City, and continue to gather for music and dance in their new home.

Read a bit about Mr. Wani’s experience on pages 7-8 of this PDF of _Museum Magazine_ in an article written by previous MFAP graduate student worker Dr. Dorothy Atuhura.

In 1976, building on her practice as a traditional dancer, Asha Premachandra founded Dances of India in St. Louis–the first classical Indian dance company established in Missouri. With her company, Mrs. Premachandra expanded into teaching and choreography, ultimately leading to numerous awards, including a 2020 Regional Arts Commission of St. Louis Fellowship.

At the link, enjoy a brief 2012 documentary from Higher Education Channel TV (HEC-TV) about the dance company and its founder: https://www.youtube.com/watch?v=crMRzpc0xmo

For more in-depth background on this master dancer, her dance company, and the tradition of Bharatanatyam, check out the YouTube video recently produced by daughter Nartana Premachandra for Dances of India’s 43rd anniversary: https://www.youtube.com/watch?v=rucuO4qLNCM 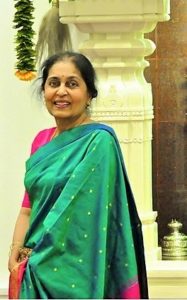 How many tourism councils boast their own master quilters?

This all-volunteer, tri-county tourism council encourages travelers to jump off the interstate and take the scenic route to visit Barn Quilts of the Boonslick. Essentially, the folk arts-infused project—grounded in quilting, vernacular architecture, and community stories—is a traveling exhibit, where the audience travels, not the works of art.

With Missouri Arts Council grants and matching funds from the region, Boonslick Area Tourism County curates, installs, conserves, and markets the trail that features over sixty destinations. Tour maps are available on the council’s website, as well as in full-color visitor guides (including local restaurants) at destinations throughout the region, like Arrow Rock State Park.

Check out this new aerial view of the quilt trail, featuring drone videography by Dragonflyover.

Where do we begin with Martin Bergin, world-renowned saddlemaker and cowboy poet?

While Mr. Bergin passed away in the latter half of 2020, he left behind a legacy in leatherwork that ranchers, cowboys, and celebrities alike may never quite forget. Bergin’s saddles may one day become a thing of the material past (and collectors’ items). We may never be without his cowboy poetry, which lives on in his videos from The Tonight Show, trade show interviews, feature stories, and film, like those collected in this playlist from YouTube: https://youtube.com/playlist… 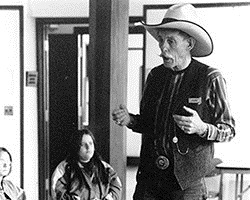 Alva Bunch, born in 1907, enjoyed a life partaking in various trades, from the timber industry and Current River fishing guide, to operating a school bus for a dozen years.

Mr. Bunch is perhaps most remembered among his Shannon County, Mo. community for the craft he learned as a young boy, chair making. Bunch and his apprentice John Clark participated in TAAP’s second year (1986), when a number of material culture traditions were introduced into the project. The slideshow here gives a tiny taste of the process Bunch practiced, taking a tree from forest to home.

Bunch passed away in 1989 leaving behind a wife, two sons, and three daughters. His chairmaking was pivotal in his life and noted in his obituary: https://www.findagrave.com/memorial/9578311/alva-bunch

Western Folklife Center’s 37th National Cowboy Poetry Gather – The Rodear Year kicked off this week, and it seems like a good time to revisit our good friend, the late Jennie Cummings of Mtn. View, Mo.

Jennie managed to corral a herd of local volunteers and the Missouri Cowboy Poets Association to turn out an exciting three-day event every April for fifteen years, swelling the population of the small south-central town with performers and visitors from several states. We’ve just posted a profile on our website of Jennie written by Marideth Sisco, who interviewed folks recently to learn more about this accidental arts administrator and beloved friend.

Photo description: In February 2015, the Missouri Arts Council bestowed the Leadership in the Arts award on Jennie Cummings, who is posed here with legislative proclamations and her devoted family. 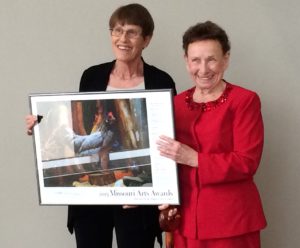 In 2015, Nola Ruth, Council chair, presented a framed Missouri Arts Awards poster to Jennie Cummings, during the day of festivities in honor of awardees.

Barbara Spande Overby (Columbia) has been a weaver for decades, creating colorful and functional household objects, including textiles for the table, kitchen, and bed. In both 1986 and 1988, she taught her apprentices (two each year) everything they needed to know about weaving coverlets.

Due to her lifelong love of weaving and the weaving community, Ms. Overby channeled her energy into co-founding Missouri Fiber Artists (MoFA) in 1978. To see two examples of her work, visit her MoFA profile here: https://missourifiberartists.org/barbara-overby-1

In 1983, Overby and four partners joined together to open Bluestem Missouri Crafts LLC to showcase and sell the works of Midwestern artisans. Bluestem is still a mainstay on Columbia’s popular 9th Street.

[While enjoying retirement now, we happen to know, too, that Barbara Overby also spent several years playing the hardanger fiddle and channeling her love of that tradition into the Hardanger Fiddle Association of America.]

200 Stories, January 2021 #ShowMeFolk #200Stories #Missouri2021 #Missouri200 1 of 200 Ahead of the U.S. Bicentennial in 1976, the National Endowment for the Arts seeded folklife programs across the country, leading to our folk and…

Ahead of the U.S. Bicentennial in 1976, the National Endowment for the Arts seeded folklife programs across the country, leading to our own folk and traditional arts program anchored at the University of Missouri. In…

Once again, we must share sad news. Early this week, we learned that previous Traditional Arts Apprenticeship Program master fiddler Gary Johnston (Nevada, Mo.) has died. We are thankful, though, that Mr. Johnston’s friend and…