Ahead of the U.S. Bicentennial in 1976, the National Endowment for the Arts seeded folklife programs across the country, leading to our own folk and traditional arts program anchored at the University of Missouri. In Missouri’s own bicentennial year, our staff will share 200 stories over the course of 52 weeks in 2021 about folk and traditional arts in the Show Me State. Some of those 200 Stories will land here on the Show Me Folk blog first, as we share portraits composed by some of our favorite community scholars.
For the post below, we thank Marideth Sisco, who put on her journalistic-ethnographic hat to conduct a series of interviews in south central Missouri in 2019. In Marideth’s first portrait, she introduces us to the late Jennie Cummings, of Mountain View, Mo., who founded and produced the Missouri Cowboy Poetry Festival in 1998. Jennie and her all-volunteer crew (including her daughter Jennifer and good friend Eulalia Polk) put their all into an event that lasted through 2013, swelling the population of their hometown for that three-day weekend each year.
Sadly, Jennie (2017), Jennifer (2020), and Eulalia (2011) have all passed away in the last ten years, so we thank Marideth for pulling a story about Jennie and the festival together now for posterity.

She was a truck driver’s wife. By profession, a keeper of medical records. Neither description fit with what they said about her.

“She was remarkably high energy for an older gal.”

“She was a real go-getter!”

”You always knew right where you stood with her.”

That was Jennie Cummings all the way. Late some nights, after her husband came home from his over-the-road missions, he would talk about life on the road, and the sparse and sometimes outrageous entertainment available on the far-flung radio stations out across Texas, Colorado, and points farther. But he’d always come back to talking about the cowboy poets that sometimes appeared on the airwaves, and how different they were. How brash. How authentic. How much he felt in common with their plainspoken eloquence. Jennie started getting fond of them, too, and regretted she only got to hear them when she went out on the road traveling with her husband; they simply weren’t available on her hometown radio station in Mtn. View, Mo.

Then Jennie discovered there was a Missouri Cowboy Poets Association! Suddenly those poets were in reach, at least potentially. If they could be in Missouri, she thought, why can’t they come to Mtn. View? So, she set about making it happen.

Her first task was to discover just where these unique individuals were located. Then, where did they gather? And, once she discovered there was actually an association and a phone number, she was off and running. She called them up. Asked where she could go to hear them. And she and husband Jim Dale went.

“What do you need to have such a meeting, a gathering?” she asked several, all who would talk to her. She took copious notes. She talked it up with everyone in her small town and the surrounding area. And, she started her own kind of gathering—of interested, willing to help volunteers They’d heard enough ABOUT these folks. They wanted to see and hear them for themselves.

But how would they fund such an endeavor? Jennie was president of the local arts council, and she thought surely their state arts council could help, if they would. She called them up—first the Missouri Arts Council (MAC), then the Missouri Folk Arts Program, and then the woman who had helped her write her first MAC grant application.

Even before the cowboy poet thing, she was wanting to do some good things for her town of Mtn. View, and I worked with her and helped her understand what MAC wanted in a grant application. But then just a few weeks later, as president of her local arts council, she attended the [MACAA] retreat for all the administrators around the state. This was the first time Jennie was introduced to the group. So, the [then] director of MAC, Flora Maria Garcia, came and was giving a presentation on the Cultural Trust program. She explained how it worked, and really, it was just for the very big organizations. So, the woman representing the arts council at Boonville, where they were doing some remodeling of their little historical theater, she asked whether their project might qualify. She put the question to Flora Maria, and she was dumbstruck; she didn’t know what to say because the Cultural Trust grant was too big; it wasn’t going to work for anybody except somebody like the St. Louis Symphony or something that size.

So, it was total quiet in the room, and then Jennie spoke up and said, ‘I believe it means you’re SOL, honey.’ She didn’t pause; she just said it. That was the first thing she said to the group, the first time MAC met her.

She was a pistol. She always showed up with great stories, and a lot of good questions, always had everybody in a really good mood. She helped us bring in [the band] Big Smith to the retreat one year. Jennie was up there dancing to their music. She really knew how to liven things up.

She was high energy; she took care of business; she worked her heart out. I remember one year we got there on Friday afternoon, and she had everything, I mean everything, in order, and once she was satisfied that we could take it from there, she just went home and went to bed. She had worked herself to the point of exhaustion. She came back Saturday afternoon for our show at the nursing home, and then our finale was on Saturday night. It was so well organized by the time we got there; she just turned over to us to do it the way we wanted to put on the show, and she never interfered.

At the time she put together her gathering, we had about five annual events that we participated in and provided the entertainment for. They were mostly in Kansas and Missouri. And some of our members would hold their own gatherings. But the most popular one of them all became the one where we got to go down to Mtn. View, to the one Jennie Cummings put together. She got the whole town involved. Two restaurants would give us all a discount on our meals. Jennie’s daughter Jennifer got a group of volunteers together and made us a wonderful lasagna dinner on Saturday night. 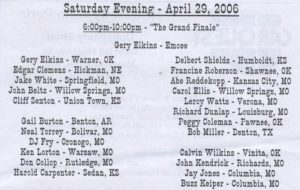 From the 2006 festival program, a list of Saturday’s Grand Finale performers

Jennie Cummings and Mtn. View, Missouri was the highlight of our year. Her daughter was high energy, too. They worked so hard at it. And, there was a schoolteacher, Jeannie Betz, who got a contest started in the local grade school getting the kids to write cowboy poetry. And, the teachers would grade and rank the top three of each class, and we would have them come down Saturday afternoon and they would perform their poems. They just got everyone involved.

That was the wonder of Jennie Cummings, Nola Ruth said: “That’s the perfect kind of art work that a community arts agency should be doing. You want people in it, and not watching it. She was great at that. She worked so hard, and I admired her for that. Just constantly go, go, go. To have the energy and be able to direct it and focus. It was a good trick. And, everyone profited.”

In 2014, Lisa Higgins, director of Missouri Folk Arts, wrote a letter of support for Jennie’s nomination for the Missouri Arts Council‘s 2015 Leadership in the Arts Award. Here’s an excerpt:

When one thinks of the Leadership in the Arts Award, it might seem unusual to put Cummings in the same company as a governor, an urban arts advocate, a statewide arts administrator, a university dean, or even the executive director of a rural regional arts council. Cummings, however, is the protagonist in a tale about a tiny arts engine that could. As the volunteer director of the Mtn. View Council on the Arts (an organization that finally resided under the aegis of the City of Mtn. View), Cummings is the ultimate accidental arts administrator—a role she came to in her mid-sixties. . . In a south-central Missouri town with a population under 3,000, Cummings established the council and season of arts events, funded in part for many years in MAC’s Community Arts grant discipline. Her signature project, the annual Missouri Cowboy Poets Gathering, could draw audiences over 1,000 with folks traveling from states like Kansas, Texas, Oklahoma, and Nevada . . .

Jennie Cummings led in ways that she could not fathom. She served as an inspiration to many other volunteer arts administrators. Instead of an ‘I think I can’ philosophy, Cummings was action personified—all grit and no quit. A grant writing season does not pass when I do not personally think of Cummings or reference her to a flustered or frustrated grant writer.

Jennie Cummings was a pistol, just as they said, and she laid down a shining path for those seeking success in community arts to follow and learn. 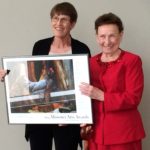 In 2015, Nola Ruth, Council chair, presented a framed Missouri Arts Awards poster to Jennie Cummings, during the day of festivities in honor of awardees. 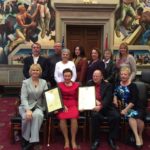 Jennie Cummings (center, in red) poses with family and friends in the Missouri House Lounge. They hold proclamations from her Missouri State Senator and House Representative, celebrating her prestigious award. 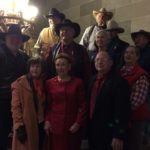 Jennie Cummings, in red, poses with First Lady Georganne Nixon and members of the Missouri Cowboy Poets Association at the Missouri Capitol after the 2016 Missouri Arts Awards.