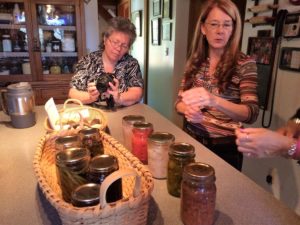 Sarah Denton (left) checks her camera in the kitchen while documenting canned goods put up by Patti (right) and Bernard Tappel during a 2015 fieldtrip to their home in Osage Bluff, Mo.. Photo by Lisa L. Higgins

Two weeks ago, we were shocked and so sad to learn that our friend, Ozark regional community scholar Sarah Denton, died unexpectedly from a heart attack on her morning walk near her home in scenic Calico Rock, Arkansas.

When we first met Sarah, she lived in West Plains, Missouri, the location of our 2010 community scholar workshop that started on Veterans Day. We quickly learned that she was a great photographer, with an incredible eye for portraits, landscapes, and seeing beauty in the ordinary. Anyone who followed her Moonmooring blog, also knows that Sarah took great photos of food in gardens, on the stove, and sitting on plates. She was devoted to the tradition of gardening and quite successful:

I have gardened with my grandmother, my father, husband, friends, Gene, in the desert, in a trailer park, in open fields, and on an apartment patio, and for the better part of the last 35 years in the Ozarks. If you have one tomato plant in a pot you are a gardener. And it is a feather in your bonnet on the road to healing the earth. Moonmooring blog post, April 9,2020 by Sarah Denton

In our adventures at Missouri Folk Arts workshops, during field surveys, and for events, we learned that Sarah was equally wise and curious. For almost ten years, we found ourselves working off and on with Sarah. She attended every community scholar workshops she could, including one in the spring of 2017, where she and her sweetheart Gene Weinbeck were stranded in Columbia due to major floods blocking their route home. Sarah was willing to serve as an outside observer for the Traditional Arts Apprenticeship Program and Missouri Arts Council’s Folk Arts Grants. She took documentary photos, for instance, of Van Buren piece quilter Barbara Culpepper and “bed turnings” of quilts at the Old-time Music, Ozark Heritage Festival. 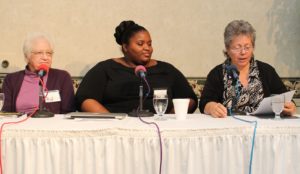 Sarah Denton (right) reads from her essay about growing up in a pipeliner family in a panel with Mary Peura (left) and Angela J. Williams (middle) at the 2015 Missouri Folklore Society meeting in Jefferson City, Mo. Photo by Deborah A. Bailey

Sarah was almost always game for a trip, and we could ask her to ride shotgun in the field or to document an event when we had a scheduling conflict. She accompanied MFAP’s director Lisa Higgins for several days in far southwest Missouri during an artist survey in 2013. We invited her to be a presenter at a workshop in Ironton in 2014. The next year, Sarah was not only game to join us for another community scholars workshop in Jefferson City but to sit on a panel with two more community scholars, who all discussed their personal documentation projects at the Missouri Folklore Society (MFS) conference 2015. She returned to MFS, in Kirksville the next year, and documented a series of traditional arts sessions. Most recently, Sarah assisted Folk Arts Specialist Deb Bailey, documenting bluegrass musician and luthier Bernard Allen at Doniphan, Missouri’s Heritage Days in 2019.

In addition to her photography, Sarah loved writing about local culture. At her Moonmooring blog, in addition to the garden, she wrote about any number of events, places, and traditions (long before we met her). Later, she wrote for MFAP, blogging about the foodways at Wages Brewing Company in West Plains and reviewing Sugar Creek’s annual Slavic Fest for the Magazine of the Museum of Art and Archaeology. Truman State Professor Adam Davis was impressed with Sarah and her family research project on the occupational lore of a pipeline worker and family. Davis ultimately invited her to submit an article for the Missouri Folklore Society Journal–its due to publish in 2021. This family/occupational folklore project was an enduring, and sometimes overwhelming, passion. Her parents had taken and saved hundreds of snapshots throughout their very interesting and often mobile lives, moving very often over ten years as the pipeline company sent her dad to his next ditch digging job. Sarah came to photography and sharing stories naturally, it seems. We know that since her mother’s death in March 2019, Sarah had worked diligently to sort and organize all the photos. 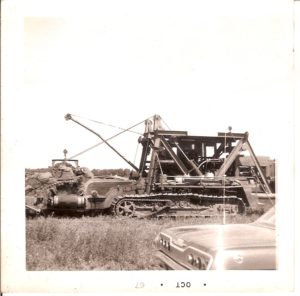 With all our travels with Sarah, there were debriefings in hotel lobbies, thoughtful emails to confirm logistics, and long phone calls to brainstorm about writing or editing an essay. Sarah was thorough and dogged. There are many stories to share: visiting the African mercantile in Noel; making baskets with the Dudenhoeffers in Columbia; meeting Robin Reichardt, a basketmaker who splits her time moving easily across the state line between Northwest Arkansas and Southwest City, Missouri; and more. Here’s just one:

When Lisa Higgins and Sarah Denton met Robin, she showed them some finished baskets, some more in process, and her materials. Her favorite style is the coiled basket, typically wrapping cotton rope with colorful fabric, then coiling the material into a basket. Almost as an afterthought, Robin opened a plastic bin full of orange twine. She asked: “do you know what this is or where it comes from?” Lisa admitted her ignorance, but Sarah knew. She piped up, noting the twine is used to secure hay bales. Both Lisa and Sarah were impressed to learn that Robin had saved back the twine from the previous summer, a major drought year, when she had fed her family’s herd of cattle in southwest Missouri a lot of hay but couldn’t bear to throw away the twine. Robin saved it, and she was converting the twine into woven mats and coiled baskets. Lisa recalls that she and Sarah discussed that story more than once, noting that Robin’s ordinary plastic bin of orange twine epitomized a sense of place and a particular time that she transformed into a memory object. [Readers can click on Sarah’s photos from the visit with Robin in the gallery below to enlarge them.] 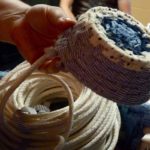 One of Robin Reichardt’s coiled baskets in process. Photo by Sarah Denton 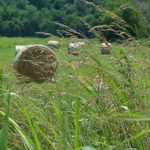 Round hay bales in a field near Southwest City, Missouri in 2013–one year after the big drought. Photo by Sarah Denton 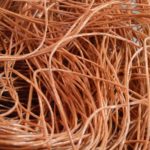 The orange twine that Robin Reichardt saved from feeding her cattle hay throughout the drought of 2012. Photo by Sarah Denton 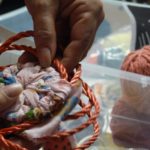 Robin Reichardt shows how she braided the orange twine to cover and coil for a new basket. Photo by Sarah Denton

We will miss making stories with Sarah; we will miss seeing people and places through her lens; we will miss her musings from Moonmooring and in person. See you down the road, Sarah Ann Blevins Denton. 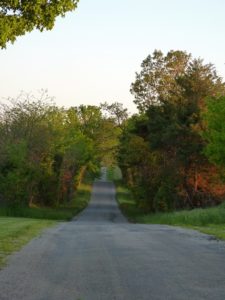 Sarah Denton shot this photo of scenic County Road 1085 in Lawrence County, Missouri in 2013 during a field survey with Lisa Higgins and consultant Jami Lewis. Photo by Sarah Denton

Our sincere condolences to Sarah’s family, friends, and all who loved her. An obituary from her family is available here: https://www.legacy.com/obituaries/baxterbulletin/obituary.aspx?n=sarah-ann-denton&pid=196712067