Welcome to another installment of Stories from the Field on our Show-Me Folk blog, a space for staff, student workers, traditional artists, cultural experts, consultants, and community scholars to share photo essays on an array of topics in the folk and traditional arts.

Our second guest blogger is Sarah Denton, who lives and works around the Missouri-Arkansas border between West Plains, Mo., and Calico Rock, Ar. We met Sarah at MFAP’s first Community Scholars Regional Workshop in West Plains in November 2010. Sarah has steadfastly participated in the Community Scholars Network since that time, attending every intermediate workshop to date and working side-by-side with MFAP staff during a southwest Missouri field survey. Sarah even led an introductory workshop session in Iron County. MFAP’s friends likely know Sarah from previous photo essays she has written for the Museum Magazine and MFAP’s Facebook page. She is also a seasoned blogger at her own place: Moonmooring, My View from the Ozarks.

Here, Sarah shows and tells readers about the art (yes, art) of foodways–those times and places where food, cultures, and identities intersect in artistic expressions.

photos and story by Sarah Denton

Brewing and distillation of alcohol have a long history in the Ozarks, beginning at least with the 18th century influx of Scots-Irish schooled in the making of spirits and brew. A generally depressed and rugged landscape mandated developing crafts that would not only stimulate the local economy but also bring more to the table. Many an Ozarker has wondered if they could actually earn a living at brewing. Eight dollars profit per gallon, and thousands of gallons sold by one bootlegger during Prohibition, proved that yes brewers could earn a living. Today’s brewers, with federal, state, and local regulations, carry on with rarer crafts and traditions that evolve in a modern setting.

“First it was moonshine, then marijuana, then they moved on to other things [and beer brewing was always one of those other things]. But if you’re poor enough and hard up enough, they call that economic development.” Ozark storyteller and journalist Marideth Sisco

I have second-handedly watched Wages Brewing Company in West Plains, Mo., come to life over the last four years, and I am impressed with its dedication to sourcing locally. Whether with locally designed and hand-built taproom furnishings, the entertainment, the food trucks, or the ingredients, Phil and Amber Wages seek to provide local flavor with their unique brews. Phil’s interest in custom beer brewing was born in 2008 when he and friend Bill Oakley, collectively known as the Punky Brewsters, started hobby brewing on the porch and in the kitchen. At first they bought brew kits that they fondly called “hamburger helper for beer.” It did not take long for Phil’s imagination to take over, and he started brewing with his own recipes. There were some failures along the way, but overall it was a rewarding hobby. 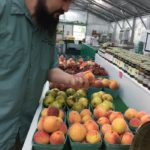 Phil Wages shops for fruits at a local market. 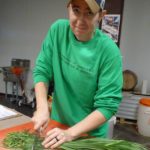 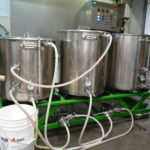 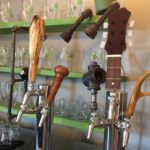 Even the tap handles at Wages Brewing Company are handcrafted objects of art. 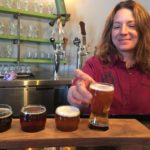 Amber Wages sets up a “flight” of beers.

Phil later brewed beer with two more friends before meeting Amy “Aym” Fischer and, in 2012, Aym became a permanent fixture in the Wages brew story, sometimes traveling alongside Phil and Amber to informally apprentice, sampling beers and researching the industry. Phil said Aym just showed up one brew day to see what was happening, and she enjoyed it so much she kept coming back. Two years later, Phil realized their business plan would work better if Aym handled the brewing and Phil handled the business end.

The Wages crew are characteristic of a fourth generation of trailblazing small batch (craft) brewers, following in the footsteps of pre-Prohibition breweries; scofflaw Prohibition-era producers; and a small surge of 1970s brewers. This most recent surge of brewers are witness to a full circle of entrepreneurial showmanship, particularly in the Ozarks.

Today’s brewers are rapidly contributing to an already rich history of craft brew. And, just as their predecessors did, are spurring local economic development. In January 2012, OzSBI, a small-business incubator in West Plains, opened its doors and offered its first “Operation Jumpstart” program, where participants developed feasibility plans for their proposed businesses. After spending the two previous years wondering if and how they could start a brewery in West Plains, the Wages found that Operation Jumpstart was their next logical step.

Successful microbreweries, or craft breweries, rely on quality and diversity more than advertising and low prices. Diversity in microbrew beers comes in large part from indigenous ingredients and imagination. The Wages are masters at ferreting out local suppliers. They have used local honey, fruits, berries and peppers; foraged dandelions; and grown their own French tarragon and lemongrass. For instance, lavender, sourced from Maranatha Farm in nearby Rover, was the inspiration for the “Teas Me Saison,” an ever-changing series of beers that feature herb teas. “Sparrow Bitter” brew uses malt produced at Sparrow Malting in Springfield, Mo., the closest maltster by hundreds of miles; the brew initially included a test batch of barley grown locally by Dustin Collins. Wages also has experimented with other interesting ingredients, including blood orange, mugwort, mushrooms, pistachios, chokeberry, and pecans—some locally foraged and grown. In the future, Phil and Aym hope to incorporate more local wild foraged ingredients like paw paws, morels, and elderberry.

In early July, the brewing company announced its “Star Spangled Ale,” a new creation made for its Fourth of July celebration with locally grown red raspberries, white wheat, and blueberries. Wages also used Liberty hops and Victory malt for the special ale. They would like to see beer’s all-important ingredient, hops, grown locally. More than 97% of the hops in the U.S. is grown in the Pacific Northwest and anchored in Yakima Valley, but hops will grow just about anywhere in the continental U.S. with proper care and patience. A reliable harvest, though, requires two to three years of growth.

Phil and Amber knew that their primary market would consist of craft beer enthusiasts and got them involved early. Before the brewery opened, Wages offered memberships through a Kickstarter campaign; sixty-six people responded and continue to receive member-only benefits fostering a sense of ownership. But, Phil and Amber also knew that for a microbrewery to succeed in a small rural town they would have to appeal to a wider range of customers. Wages Brewing Company would need to be known, not as a bar, but as an interesting entertainment destination that happens to serve great beer. The menu also includes local wines, house-brewed cream soda, and usually a cider and mead. Local food trucks set up right outside to provide snacks and great meals to enjoy inside the taproom or out on the patio.

The Wages wanted to appeal to the broadest range of customers possible: young and old, men and women, music lovers, game players, and others looking for a fun and comfortable place to meet with friends. Amber Wages was passionate about creating a woman-friendly atmosphere and I feel she was successful. I immediately felt comfortable walking into the spacious room with its “steam punk lite” decor. Big smoky windows give view to the parking lot; there is a thoughtful purse hook to hang my bag at the bar; and there are no long dark hallways. A surprise to Phil was the age of most of his initial regulars. He expected most to be his own age (mid-30’s), but more are much older, perhaps because since the early 1970’s, West Plains has had an influx of back-to-the-land-movement people. The particular night in July that I visited with my beau Gene to fill our growlers, the taproom was standing room only with old friends we have known, some for as long as forty or more years. Many of these “aging hippies” are the very artists and growers who have helped make Wages Brewing Company what it is now. On any given weekend night, one can stop by Wages Brewing Company and taste a unique, very local, beer.

According to OzSBI founders, the Small Business Administration identified West Plains, Mo., and the area as the most entrepreneurial region in Missouri and forty-fourth in the nation in a 2005 study. Today’s brewers, like Wages Brewing Company, are rapidly contributing to an already rich history of craft brew. And, just as their predecessors did, they are spurring local economic development. With a motto like “The middle of nowhere never tasted so good” and a commitment to local foodways and markets, Wages is off to a great start.