It is with great pleasure that we roll out profiles of the 2019 Traditional Arts Apprenticeship Program teams of master artists and apprentices.

This week, we are excited to introduce readers to master Ozarks Riverways gigmaker Ray Joe Hastings and his most recent apprentice Keith Whiteside. 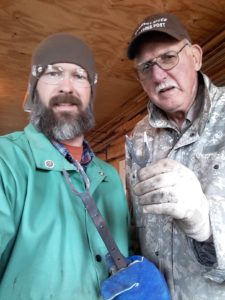 Keith Whiteside and Ray Joe Hastings pose in the shop with two-prong gigs.

Most of our readers know Ray Joe Hastings of Doniphan; he has participated in the Traditional Arts Apprenticeship Program since 1996, when he himself apprenticed to the late Paul Martin of Bunker. Just last April, MFAP featured Mr. Hastings in a Then and Now: Apprentice Journeys program, when Folk Arts Specialist Deborah A. Bailey interviewed him about his experiences previously as TAAP apprentice and later as a TAAP master artist in 2003, 2007, and 2011.

Missouri’s TAAP teams typically begin their lessons each November, after volunteer panelists review and score applications in October. Due to Missouri’s unpredictable winter weather, MFAP staff and evaluators usually must wait until late winter or early spring to visit TAAP teams to document their progress. Of course, Bailey and the teams are in communication often throughout the winter; they update her on their progress, and she works with many teams to schedule public events in the spring or early summer (stay tuned  here for news about 2019 events).

This year, we ask TAAP teams if they could share quick winter progress reports with “selfies.” Apprentice Keith Whiteside really came through for our request, sending along photos that illustrate his progress in learning to forge gigs at Ray Joe Hasting’s side. 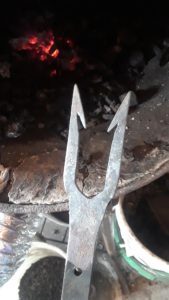 Working on a two-prong gig at the forge 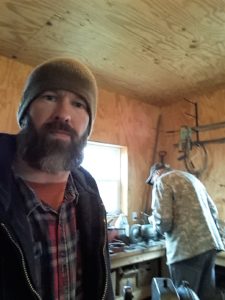 Whiteside in the shop with his gigmaking mentor 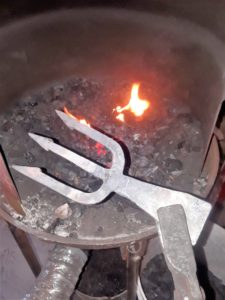 Whiteside works on a three-prong gig.

For those unfamiliar with the tradition, blacksmiths make gigs at their forges, crafting these seemingly simple yet artistic tools that are used to hunt fish, particularly “suckers.” Mr. Hastings points out that there are many variations in styles: “river gigs, creek gigs, root gigs, shoal gigs, and bow gigs. You can have a single arrow type, two prong, three prong, four and more.” Mr. Hastings literally wrote the book on gigs, self-published in 2008: Bow & River Gigs: Used in the Clear Streams of the Ozarks.

Before his own apprenticeship, Hastings avidly collected gigs from the region. “A pretty gig is not that easy to make. A beautiful gig is balanced and pleasing to the touch and has symmetry, particularly between the socket, prongs, and beards.” Hastings has studied the tradition so deeply that he can tell you who the best gigmakers in the region were, and which of their gigs the collectors prize.

Keith Whiteside explains to us that his interest in forging gigs came originally from his experience as a third-generation auctioneer, where he saw hand-forged knives, tools, and occasional gigs in estates over the years. Once his interest was sparked, he read books, taught himself to make knives, set up his own forge, and visited with Doniphan area blacksmiths like Chris Miller, who teaches at the historic Tom Kennon Blacksmith Shop. After initially watching Hastings make gigs, Whiteside read the 2008 book cover to cover. As their relationship grew, and the master artist observed Whiteside’s skills, he invited Keith to apprentice.

Hastings also paints a picture of the practice of gigging in the region that makes us swoon a little, with both appreciation and hunger: “I am 80 years old now and I remember the schools would close on the first day of gigging. It was like a holiday. It also was an important source of food for my family and many others. A lot of us grew up pretty poor. During the gigging season, families come down to the river and watch the gigging go on at night. We bring the oil, fish fryer, cornmeal, bread, and beans with us and afterwards we fry the fish right on the river.”

Whiteside adds, “Gigging is a longstanding traditional way to fish in our region, and gigging season is always eagerly anticipated among the locals still today, including myself. It is also a time when family members who live away from the Ozarks tend to come back to visit and gig with their relatives.”

Gigmaking is clearly a place-based tradition that is integral to community life, from the annual gigging season to the foodways traditions of preparing, then sharing, the fried fish and favorite side dishes along the river. In the region that Hastings and Whiteside call home, some still fish from hand-made johnboats, which also have a long history on riverways.

To learn more about the gigging tradition in the Ozark Riverways region, readers can check out the following links:

Missouri Folk Arts Program invites readers to hear Ray Joe Hastings’ upcoming talk “The Art of Ozark Gigmaking as seen in Howard Baer‘s Watercolor on Paper” at the Museum of Art and Archaeology in Columbia, Missouri on Friday, June 14, 2019 at 4:00 p.m. at 115 Business Loop 70 W in the galleries on the second floor. Keep an eye on MFAP’s Facebook page for more details. 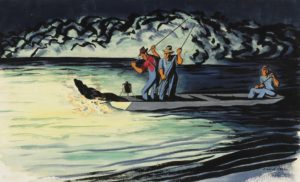 Howard Baer (American, 1906-1986)
Gigging, The Current River, 1947
Watercolor on paper
Gift of Scruggs-Vandervoort-Barney, Inc.
Transferred from the Office of the Vice Chancellor for Operations, MU (2014.10)