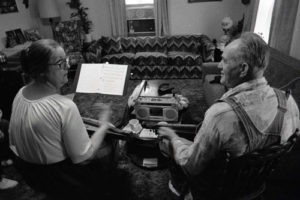 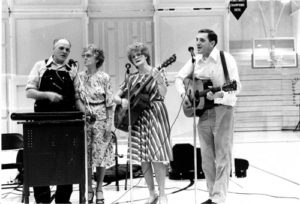 When William Graves was asked in 1987 if there was anything in particular he wanted to include in Traditional Arts Apprenticeship Program publicity about his art or his life, he wanted it known that he’d “soon have enough grandchildren to dob a house.”  William Graves lived in Lebanon, Missouri and among his professions he listed were farming and construction.  He was also a valuable link in the continuance of the Graves family tradition of the walking cane dulcimer.

The “walking cane” dulcimer is an integral part of the Graves family tradition; that particular kind of dulcimer was created by his grandfather, John Mowhee, a Cherokee who served with the Union Army as a scout.  The instrument got its name for its dual purpose as a musical instrument and, according to family stories, a walking aide for Mowhee.  This dulcimer variation has three strings and is played by strumming the strings with a turkey quill.

Mr. Graves learned to play dulcimer from his mother, who was herself a fiddler. “When I was learning to play this dulcimer,” Graves said, “mother made me pick it with my thumb before she gave me a turkey quill to use.  I wore all the hide off that thumb!  I wasn’t but nine when I started playing.”   As an adult, Mr. Graves performed frequently in his community with his wife Doris, his sons Don and John, and his daughters Vivian and Daisy.

The walking cane dulcimer’s appeal as an instrument and William Graves’ appeal as a master are evident in the number of apprentices he took on through the years.  Not only did he work with his own children, he also took on neighbors and others from the surrounding area who had an interest in learning the instrument. His son John and daughter Vivian were both motivated to keep on the family tradition; Vivian stated, “I grew up listening to this way of playing.  Maybe someone else would enjoy it and I can play it.”

John recognized the difficulty in keeping the tradition alive, and he said,  “I have been wanting to learn how to play the dulcimer for some time, but could never get dad to take the time I needed.  I feel I had an extra bonus by being in the program and having my dad for a master.”

Apprentice Connie Welch (TAAP 1989) stated, “Mr. Graves is a traditional Ozark music man,” and his abilities, she said, were “outstanding.”  Today the walking cane tradition continues to be a part of the Traditional Arts Apprenticeship Program through Bill’s son Don, a master of the walking cane dulcimer himself, who is creating, playing, and teaching the instrument to this day.

Audio clip: William Graves instructs his apprentice and son John Graves.  The Graves recorded many of their lessons, which are now housed at the Western Historical Manuscripts collection at the Missouri State Historical Society.