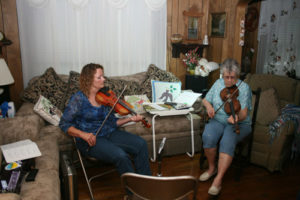 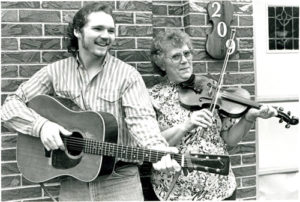 Vesta Johnson describes fiddling as “excellent therapy.” A fourth-generation musician, Mrs. Johnson is a member and co-founder of the Missouri Fiddlers and Country Music Association. “I started playing fiddle at age seven. I learned from my mother at home, and I learned from my dad and other fiddlers from the area. My dad once handed me the fiddle when he was playing at a house party and told me to play a couple of tunes, which I did. I don’t remember ever being asked again.”

According to her many students and other fellow-fiddlers, Vesta Johnson’s fiddling is known for its infectious rhythm.  Her sense of “good time” has helped to establish her deserved reputation as a talented dance tune player.

Although her mother, sister and daughter also played the fiddle, women fiddlers of Mrs. Johnson’s generation are relatively rare.  During her decades as an instructor in her home and at the Bethel Fiddle Camp, Mrs. Johnson has worked to provide opportunities for all young fiddlers to ensure the continuation of the tradition. “We just never had the opportunities the men had,” Mrs. Johnson told MFAP staff member Julie Youmans in 1988.  “I wish I had had a fiddle camp like this to help me.  Women didn’t just go up and play with strangers like they are all doing here, and I feel uncomfortable about breaking in on a jam session to play.  Not a woman’s proper behavior. “

In 2006, Mrs. Johnson reminisced about her long career as a fiddler. “I even played fiddle contests—even then [1970s and 1980s] women did not play fiddle contests really—it was always men, the judges were men too. But I made myself get up and do it. There were some tongues wagging, and looks, too. It wasn’t always easy but I saw no reason why women couldn’t do it.”

Over the years, Mrs. Johnson has taught hundreds of fiddlers in both formal and informal lessons. During a site visit at Mrs. Johnson’s home in Kirkwood, Julie Youmans observed, “Vesta is remarkable in her seemingly never-ending pool of fiddle students that keep coming out of the woodwork to ask her for help.  She repeats that she never felt she was a teacher, yet she obviously does it well.  Last year at the Bethel Fiddle Camp, she was touted among the students as one of the better, if not the best, of the teachers there.  She makes them play a lot, rather than taking too much time demonstrating, and she is very organized in how to go about it.”

Mrs. Johnson is known for her vast repertoire of Missouri fiddling tunes, particularly dances tunes, including hoe-downs, hornpipes, two steps, waltzes and schottiches. Apprentice Megan Green wrote in 2006, “I’ve learned a lot of tunes from Vesta but I have much more to learn…She’s just a wonderful fiddler and person too. She knows so many tunes I want to learn and she also has the history and perspective of many years. She knew and played with a lot of the great fiddlers from Missouri and she tells me about them too and what she learned from them throughout the years.” Ms. Green added, “I’ll keep on learning from Vesta as long as she’ll have me.”

Now in her 90s, Mrs. Johnson regularly appears at local, regional and national events. She continues to participate in the TAAP program with new apprentices, maintains an active teaching schedule, plays at monthly jam sessions and carries on her musical traditions both within her family and within the wider communities to which she belongs.