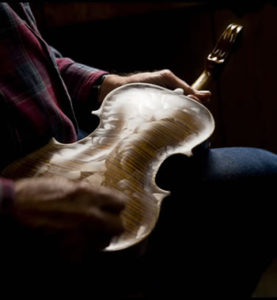 As a young woman of only eighteen, Naoma Powell, now eighty-one, accompanied her father to Cope Ashlock’s violin shop on Broadway Street in downtown Columbia. They brought along an old, badly battered, and broken Italian violin: “My father said that Mr. Ashlock was the only person who could repair it.” In the following weeks, she returned to the shop and watched as he rebuilt the violin. “It was so hot in his shop, but, oh, he was a real artist!”

The art of luthiery combines an indescribable artistic intuition with the structural skills of an architect, the carving skills of a sculptor, the inventiveness of a mechanical engineer, and the ear of a musician. Geoff Seitz perhaps states it best – the art of making instruments emerges in “the ability to take your skills, and go beyond them to the next level.”

As a young artist, Powell clearly recognized the unmistakable process of creativity that unfolded before her eyes, as wood from the natural world was transformed. Indeed, Greg Krone, a former environmental educator, knows that connection, as he is inspired by his love of music, the outdoors, and the potential to “use the materials of nature to create something very beautiful.”

Years later, while writing a letter to friends, Powell recalled her meeting with Cope Ashlock in a poem about a tree that fervently wished to sing but “could only whisper.” After the tree died and fell to the ground, a luthier harvested the wood. Powell’s poem goes on to playfully narrate how that luthier fulfilled the tree’s wish. As if she anticipated this exhibition, she recently published the poem she calls “The Singing Tree” in a book of her drawings and verses.

“….On forest ground for many months it lay
Until a kind, old man picked out the tree.
“Oh, what wood. And what you will soon be!”
He took his chisels, saws and glue
And cut and gouged until his task was through.
The man had shaped a singing violin.

He trimmed and sanded till the wood was thin,
And by its careful shaping gave it space for sound;
There was no finer tone the world around.
…Each year it sings still sweeter, high and low:
“At last I sing my song that life is good,
Though I was once a silent tree of wood.”

From the book The Singing Tree / Naoma Powell / Copyright 2006