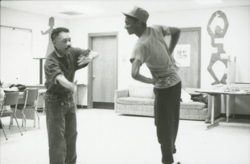 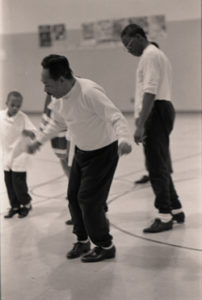 Richard Martin was born in St. Louis, Missouri in 1928, and in the course of his life lived in Chicago, New York, and Mire, France. He obtained a bachelor’s degree in business administration and worked with computers and in teaching positions like adjunct faculty at the Harris-Stowe State College in St. Louis. An active member of the arts community in Missouri, he founded the Children’s Performing Arts Academy in St. Louis and was a member of the Arts and Education Council of Greater St. Louis and the Missouri Folklore Society.

The nephew of the world-renowned dancer Josephine Baker, Mr. Martin’s desire to perform seemed fated; his very first venues included the living rooms of his family and neighbors. His formal career began with a performance with the legendary Bill “Bojangles” Robinson when Mr. Martin was only four years old; at the age of 10, he had performed at places like the St. Louis Municipal Opera, community centers, and neighborhood taverns.

Mr. Martin founded the Children’s Performing Arts Academy, a not-for-profit organization dedicated to teaching arts like jazz tap and other arts to disadvantaged youth in the St. Louis area. Martin intended the Children’s Performing Arts Academy as a source of motivation and discipline that translated to all aspects of his students’ lives. He took a great deal of pride in noting that his pupils obtained at least a high school education, if not further. His students’ admiration was evident in their desire to emulate Mr. Martin. In an application dated 1991, apprentice Sean L. McGilberry stated that he wanted to be a professional performer and teacher himself, and ““I take pride in the knowledge that I have obtained through Mr. Martin’s leadership and being aware of who I am and having some focus to where I am going with my skills.”

Mr. Martin co-produced the African & Irish American Multi-Cultural Concert in St. Louis in collaboration with TAAP master Helen Gannon; the event featured performances in both African-American jazz tap dance and Irish American step dance, in an innovative display of the relationship between the two art forms.

Mr. Martin’s frequent involvement with the TAAP program often included multiple apprentices in a range of ages from grade school to high school. His commitment to teach the art form and to educate his students about its complex cultural heritage was apparent in the statements from the apprentices themselves. Missouri Folk Arts Program Director Dana Everts-Boehm relates in a site visit report in 1991 of how “they loved the dance classes–but how Mr. Martin was a tough taskmaster.”

Audio clip: Richard Martin asks a student to demonstrate a new step and then supervises the whole group practicing it in a lesson recorded September 9th, 1993.