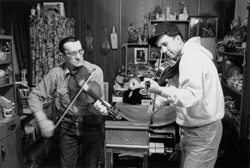 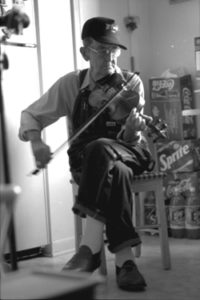 Pete (Preston) McMahan was born near Bluffton, Missouri. Throughout his life, he worked in tire sales and service; he was a veteran of World War II. Mr. McMahan became interested in playing the fiddle at age six listening to old time fiddler Clark Atterberry play at local dances.

Mr. McMahan and his seven siblings all played musical instruments; he stated, “We just entertained ourselves” at home and at parties. He won his first fiddle competition at age fifteen, and he remained an active, much-honored contestant (calling his prizes “grocery money”) and contest judge for decades. Among his many accolades, Mr. McMahan was inducted into the Missouri Old-Time Fiddling Hall of Fame, and he recorded several albums of fiddle tunes, including a selection in the Grammy-nominated Now That’s a Good Tune: Masters of Traditional Missouri Fiddling. In 2005, a 2-CD set titled, Pete McMahan: 50 Old-Time Fiddle Gems, was released. Produced by Mr. McMahan’s long-time friend and fellow fiddler Howard W. Marshall with assistance from Sarah McMahan, these recordings are reissues of four LPs made by Mr. McMahan in the 1970s.

In a TAAP site visit report from 1990, Howard Marshall stated, “McMahan is an impeccable master fiddler and known far and wide for his music. He has deep authentic roots in the strictest definitions of traditional art in Missouri. “ Mr. McMahan often told Marshall, “You’re not playing the fiddle unless you make people want to dance.”

Audio clip: Pete McMahan discusses and demonstrates harmonic notes on the fiddle in a lesson with John Williams from 6/11/1998.

For further online reading, check out the profile of Pete McMahan at Missouri Traditional Fiddle & Dance Network and a tribute in 2000 from Howard W. Marshall in Fiddler Magazine.