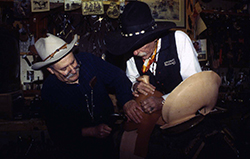 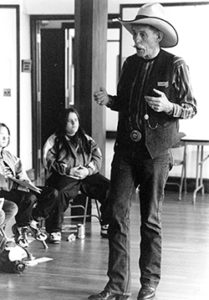 In his 1986 application to the Traditional Arts Apprenticeship Program, Martin Bergin wrote, “The highest honor I have received or could ever receive is the acceptance and recognition of my saddles by my peers and those buckaroos and cowboys whom I serve.”

Martin Bergin learned saddlemaking from old-time saddle makers in West Texas and New Mexico, where he worked as a cowboy, horsebreaker and rodeo competitor as a young man. He had already been a saddlemaker for fourteen years when he enrolled in the J.M. Saddlemaking School in Whitewood, South Dakota. Mr. Bergin described his commitment to teaching to Alex Primm during an outside site evaluation in 1988. “I figure that I’ve learned so much from other people during my life, that I feel I have some kind of obligation to pass on what I’ve learned to others.” His work with seven different apprentices during eight partnerships in TAAP demonstrates his drive to share his knowledge and skills.

Suzanne Polson (1988 TAAP apprentice) met Martin Bergin when she brought him a 1902 West Texas trail saddle for restoration, after trying unsuccessfully to get other saddle shops to take on the difficult project. She spoke highly of Martin Bergin’s teaching: “he showed confidence in my ability to learn saddlemaking and was willing to teach me without taking into consideration the fact that I am a female.” Another apprentice, Michael A. Phillips, observed, “After working with Mr. Bergin for a couple of years I have recognized the vast amount of saddlemaking knowledge that he has and more importantly the fact that he is willing to work with apprentices and teach the tradition. Most saddlemakers won’t take the time to pass the tradition to others.”

Mr. Bergin is not just a saddlemaker, however. He is also a well-known expert in the history, composition and performance of cowboy poetry. In 1990, he was the first TAAP master artist to teach a verbal art. After a site visit in March of 1990, MFAP staff member Patrick Janson wrote, “Bergin is not only a wonderful spokesperson for the state’s traditional arts, he is a well-informed practitioner. Most everyone who comes into contact with Martin appreciates the artistry of his saddlemaking, but few understand his depth of knowledge when it comes to Missouri’s historic ties to the nation’s cowboy/western heritage.” Mr. Bergin’s poetry was described by MFAP staff member Julie Youmans as “witty…and bittersweet.” He frequently signed his correspondence “Take care, hoss, and keep your saddle blankets clean.”