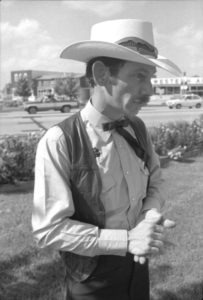 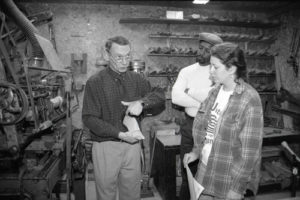 Joseph F. Patrickus, Jr. was born in Chicago, Illinois but has been making custom Western-style boots in Camdenton, Missouri since 1978. Taught by his California-dwelling Uncle Aldie, Mr. Patrickus is a fifth-generation custom bootmaker. He credits his training as an electrical engineer with an easy transition into a second career in bootmaking.

Mr. Patrickus makes custom boots for “the true boot connoisseur,” incorporating regional and exotic materials in the finished product. In addition to making boots, Mr. Patrickus is one of just a few artisans who still makes wooden “lasts”—the wooden form around which the boot is shaped—rather than relying on mass-produced plastic lasts.  In 2007, Mr. Patrickus noted, “In my opinion, the art of making a great western boot includes every aspect of the boot—from the design and visual artistic elements to quality constructions and a perfect fit enabled by the use of custom lasts.

Outside evaluator Donald Love praised Mr. Patrickus’s teaching during a 1987 session, observing, “bootmaking is a slow, laborious process.  Even a master requires weeks to finish a pair.  Beginners could easily become burned out from trying to work too fast, or discouraged by the slow pace.  Joe keeps up a steady stream of encouragement.  He urges them to the next steps, and, when necessary, reins them in to make sure the work at hand is being done with sufficient care.”

Among his many apprentices are Mr. Patrickus’s son and daughter, who were eager to carry on the family tradition.   According to MFAP staff evaluation in 1989, there were only three women who practiced traditional bootmaking in the United States.  Kathleen Patrickus noted, “I love making boots, I always have wanted to learn.  You can put your dreams in boots.  I’ve helped my father in the shop for several years, and this program has made it possible for me to learn how to make boots from the beginning.”

Audio clip: Mr. Patrickus and Stephen Mino discuss the process of learning inlay technique with MFAP Folk Arts Specialist Deborah Bailey on a site visit to the apprenticeship in 2007.