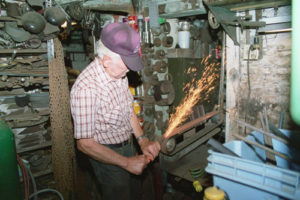 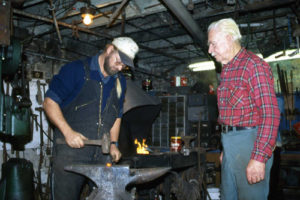 John Glenn learned the art of blacksmithing from his father, a practicing blacksmith in St. Joseph, Missouri. According to town tradition, St. Joseph was the last stop for wagon repairs for those traveling West, so blacksmithing has a long and venerable history in that area.

In his lessons, Mr. Glenn’s first goal is to orient the apprentice on the safety rules of the shop. Then he taught his apprentices metal identification, composition, and properties. With this background knowledge in place, Mr. Glenn demonstrated methods for handling the fire and shaping and forging the metal and supervised the apprentice in his work. Mr. Glenn was also interested in teaching team hammering, in which, he said, “The smith and his three helpers would stand around the anvil in a circle. The smith would strike the work and each helper would duplicate his strike in turn.”

Mr. Glenn’s work complements the historical richness of St. Joseph; for example, in a TAAP application dated 2005, he stated “I make, restore, and repair ironwork fences that are found around some of the old Victorian era houses in St. Joseph,” and he also fashions tools to aid in the restoration and upkeep of historic buildings.

Mr. Glenn’s lessons were applicable to the many functions of blacksmithing, as evidenced by the wide range of interests his apprentices had in the craft. According to former apprentice James George in a letter written to support Mr. Glenn’s application to TAAP, Mr. Glenn’s apprentices learn “early American rifle building, ornamental iron work, hobby knife making, iron art sculpture, and medieval weaponry,” as well as creating camping equipment.

Mr. Glenn’s apprentices included family members like his grandson, Calvin Glenn, who began his apprenticeship when he was still in high school, as well as his son, William Glenn. William praised the usefulness of the lessons with his father, stating that he “has helped me in the making of my specialized tools for working on old and historic buildings,” and said that Mr. Glenn was “extremely knowledgeable and quite skilled.”

Audio clip: John Glenn demonstrates tongs specifically designed to work with horseshoes to an audience gathered at in Jefferson City as part of the Tuesdays at the Capitol program on April 28, 1998.