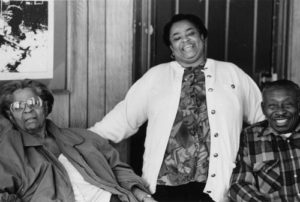 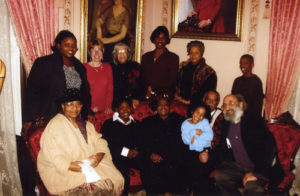 In 1988, Gladys Coggswell first entered MFAP’s Traditional Arts Apprenticeship Program as apprentice in Jazz and Blues Gospel singing to Mae Wheeler, also known as “Lady Jazz,” of St. Louis. As her reputation as a storyteller and educator grew, Ms. Coggswell, a counselor with a masters degree in Education, began to focus more of her time promoting education, pride, and local knowledge through storytelling.

Ms. Coggswell grew up in New Jersey and lived in New York before moving to Missouri with her husband in the 1970s. She was immersed in traditional storytelling from an early age and learned many stories from her great grandmother who raised her. In 1992, she told MFAP director Dana Everts-Boehm in an interview, “When I was very small we had a boarding house, so there were other older people in the house. We heard stories, not only when people gathered, but also from my great-grandmother, who I sometimes had to follow from one room to the next to get the end of the story.”

Ms. Coggswell focused on showing her apprentices how to tap into their own family stories and personal experience narratives. When she introduced her apprentice, Deborah Swanegan at the Big Muddy Folklife Festival in April 1992, Ms. Coggswell spoke highly of her abilities: “Our sessions together are just something that’s beyond joy. Debbie is just such a wonderful learner. She has a natural ability to do storytelling. She has a wonderful family history of her own.”

Mutual inspiration, joyfulness and respect have marked Ms. Coggswell’s partnerships in TAAP. In 1998, apprentice Evelyn Pulliam wrote, “I want to work with this master because we have the same love of our culture and she has shown an ability to get important information from our elders that needs to be preserved and shared.”

Ms. Coggswell’s apprentices spoke highly of her talents as a tradition bearer and a performer with the ability to make a positive difference. In 1993 Vivian Hawkins described her goals for the apprenticeship with Ms. Coggswell: “I would like to encourage younger people to take pride in their past and to share it with others. I believe that when people know their own history and legends they become more interested in also sharing and learning that of other cultures.” Ms. Coggswell’s generous sense of humor is reflected in that of her apprentices; Sam Williams joked in a 1993 application, “I hope to keep an audience’s attention half as long as she does!”

In a letter of support for an award nomination, historian and editor of the Missouri Heritage Series Rebecca Schroeder wrote, “Gladys Coggswell can only be described as a national treasure, and her enormous contributions to the artistic and educational life in Missouri in the past two decades are beyond measure…Whatever their ages her audiences are drawn into the world she evokes in her performances and always emerge with a better understanding of the human condition.” Ms. Coggswell has received numerous awards, including a Missouri Arts Council award in 2005, and the Governor’s Humanities Award in 2010.

Today, Ms. Coggswell combines her talents and employs storytelling and gospel singing in her role as the Storyteller in Residence at the Mark Twain Museum.

Audio clip 1: Gladys Coggswell discusses how she encouraged her apprentice Evelyn Pulliam to learn more about harvesters and “going on the harvest” in her community.

Audio clip 2: Evelyn Pulliam tells the story of how African American workers would follow the harvest north to pick tomatoes, potatoes, apples and other produce during the wane of sharecropping and how the community left at home would care for the children left behind.