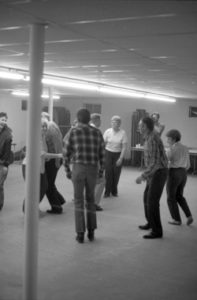 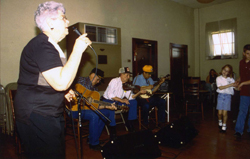 Any conversation about the notable music tradition of Ava, Missouri is incomplete without mention of Edna Mae Davis, square dance caller and dancer. In an application for the TAAP program, she listed her occupations as housewife, clerk, and ‘beauty operator,” but Mrs. Davis’ career in square dancing started much earlier than that, when she started dancing with her family at the age of three. “That was about all we did in our community,” she wrote.

Edna Mae Davis’s leadership role in maintaining the area’s musical heritage was evident in the active role she took as a teacher and performer. She stated that while “[t]he tradition is very good in this community, […] fewer young people are learning how to do this.” In order to keep the tradition alive, she apprenticed not only family members (her daughter Cathy, for example, apprenticed as a caller in the program) but also members of the community, often teenagers.

Noted Ozarks community scholar Gordon McCann complimented Mrs. Davis’ aptitude for teaching square dancing; he stated, “I have been to a number of square dances where Mrs. Davis was present and have witnessed her ability to take amateurs, ‘city slickers’ such as my wife and myself, and in an hour’s time having us keep up with the best of them as far as the figures are concerned.”

Outside TAAP evaluator Catherine Parce agreed with Mr. McCann’s assessment; she participated in a 1990 square dancing event in which over thirty children cycled in and out of the dance. “Some of the youngest children, several of whom had never danced before, had trouble distinguishing right from left. With tireless patience Davis and her daughter pointed out the errors and re-directed them time after time.”

In an obituary, Missouri Folk Arts Program director Lisa Higgins observed the joy Mrs. Davis took in her work, stating, “Every time I worked with Edna Mae or ran into her at events, like the West Plains Old Time Music & Heritage Festival, I could see how much she loved dancing and calling. As I have looked through old photos of her from the archives, Edna Mae is always smiling, sometimes even throwing her head back and laughing with joy.”

Audio clip: The square dancers tap out a lively rhythm to the music as Edna Mae Davis calls the dance at the Big Muddy Festival in 2001.