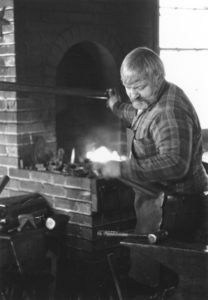 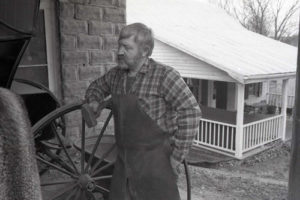 Blacksmith Darold Rinedollar is known for his horseshoeing and agricultural blacksmithing, as well as fine decorative and household work. Originally from Rockford, Illinois, Mr. Rinedollar learned his trade from aging German blacksmiths in upstate New York when he was a young man. Mr. Rinedollar takes great pride in his work and communicated that pride to his apprentices. “That’s what I was taught by the old Germans I apprenticed under in New York State. Besides trying to get across why we do each step that we carry out, I try to get across the difference between crap and the best that we can do.  The old timers were concerned with getting it right.  Speed wasn’t that important to them. It had to be done right.  We know the difference.”  A working smith since 1956, Mr. Rinedollar told MFAP staff in 1985 that blacksmithing “is my life. I have never wanted to do anything else.”

Outside evaluator Sandy Primm observed in 1988 that, “pride is one of the main things Rinedollar tries to get across.” Apprentice Paul Harvey understood Rinedollar’s teaching and clearly felt a similar pride in the work he performed with his hands, writing in a 1987 TAAP application,  “I stand there black as the coal I use, with people looking in wondering, how can he do this? Where is the machine? I can honestly answer, right here in my own two arms.”

Rinedollar was very warm in his praise of apprentice Paul Harvey in his letter supporting the partnership for 1987.   He had worked with him in the past, and said of Harvey’s maturing within the profession,  “I hired a typical teen-age boy who couldn’t wait to get paid and leave early Friday to go “cruising” up and down 5th St. and ended up with a very responsible man who, on more than one occasion, has worked with me up until 1 or 2 AM when I had to have a project done or was going to a show the next day.”

In his application to apprentice with Mr. Rinedollar, Michael Brewer wrote, “Darold Rinedollar is probably one of the more accomplished blacksmiths in this region and from my observation is a very patient and willing teacher.  His knowledge of ornamental ironwork is extensive and his style is well known.”

Passing his knowledge on through first-hand learning was extremely important to Mr. Rinedollar. He said, “Even something as simple as heating steel “cherry red” cannot be explained in a book.  It must be part of the tradition; until someone shows each beginner what it should actually look like, the beginner has no reference.  Each person’s eye has to be trained, everyone has to learn the color for themselves.”

Audio clip: Mr. Rinedollar explains the different types of coal, including green coal and coking coal, used to achieve the proper temperature and flame type in the forge to MFAP staff members during a January 1986 site visit.