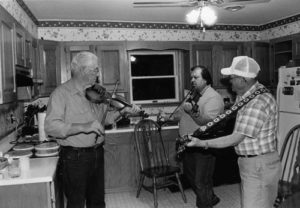 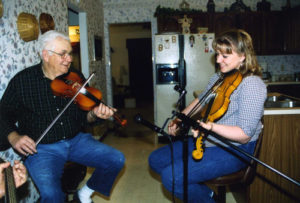 Cliff Bryan hails from the West Plains, Missouri region.  He began playing in the 1940’s, and has stated he learned his art from old time fiddlers Charlie Hiler, George Edison, Emerson Briles, and “any other fiddler I could get cornered.”  When Bryan retired from farming, his fiddling became “the big part” of his life.  Mr. Bryan never cared to enter fiddle contests, preferring instead to play for community music gatherings and parties.  Mr. Bryan fostered appreciation for the art not only by taking on apprentices, but also by playing often in public, especially at dances and at the senior center in West Plains.

Ozark short-bow fiddling differs from other bowing techniques used by Missouri fiddlers. Mr. Bryan’s first TAAP apprentice, Don Buedel, encouraged Mr. Bryan to apply to the program because he realized that Mr. Bryan’s style of playing was unique and could be endangered.   In a report from an outside evaluation with Mr. Bryan and his apprentice Jessica Collins in 2003, Howard Marshall noted that “only five or six inches of the bow, near the tip, seem to be used to play on the string,” which is particularly good for playing dances.  Students sought out Mr. Bryan as an instructor particularly to learn the tradition of bowing that is distinct from other bowing techniques even within the Ozarks.

Mr. Bryan’s teaching style was appreciated by his students and admired by outside evaluators like Howard Marshall. In describing his visit, Howard Marshall noted “Cliff’s teaching style is very supportive and very generous.  He watches intently and politely, adding a comment or a suggestion as needed.  But generally, like most old-time fiddlers, Cliff teaches by example and demonstration—just like a master blacksmith or carpenter. Cliff was generous but brief with praise during the lesson…There is a great amount of mutual respect and mutual admiration between teacher and pupil.”

Mr. Bryan’s apprentices frequently remarked on his kindness and encouragement. Apprentice Rachel Reynolds, who was applying with Mr. Bryan for a second year of the program, said in her 2007 application:  “Aside from being just an all-around great fella, Mr. Bryan has a fiddle style and a repertoire of songs that I greatly admire.  He is as excited about teaching me as I am about learning from him.  The times that I have spent playing with him, he has offered instruction that I could understand and has offered endless encouragement.” Reynolds continued, “I hope to learn as many of the great old-time tunes from Mr. Bryan as I can.  I hope to ‘make my bow shake,’ as he says.”

Audio clip: After playing “Bonaparte Crossing the Rhine” together, Mr. Bryan tells his apprentice Amanda Case, “Now, I’m gonna let you play it by yourself so that you can hear it,” which she does, to the admiration of the backup guitar player. Audio Credit: Deborah Bailey.