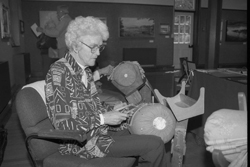 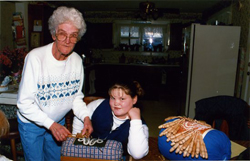 Christa Robbins was born in Bernbach, Germany (formerly East Germany). She started her lessons in kloppelei in a formal setting, the Kloppelschulen, or lace school, when she was a child. That particular region is known for the bobbin lace tradition, though after World War II, Mrs. Robbins stated in an application to the TAAP program, studying the craft in a formal setting was no longer an option.

Mrs. Robbins met her husband, a U.S. serviceman, in Germany. After World War II they moved to the United States, and Mrs. Robbins brought the kloppelei tradition to Missouri with her. She taught her craft to relatives like her sister, children, and grandchildren, as well as others who expressed interest. She enjoyed keeping the tradition alive. Outside evaluator LuAnne Roth noted that in the beginning of Mrs. Robbins’ career as a lacemaker, only a close circle of family and friends saw her work. Later, she was “’discovered’ by craft aficionados and German heritage festivals, and thus, she is now a much sought-after artist and teacher who ‘can’t keep up’ with all the requests for her work and time.”

Mrs. Robbins’s teaching methods included not only verbal instruction and demonstration, but also discussion of the history of the art form. Kloppelei was introduced in the 1500s in Germany as a way for peasant women to earn money, and the tradition continued into Mrs. Robbins’ childhood. She began the kloppelschulen at the age of 8 in order to learn a skill to help earn money for the family.

Her apprentice Linda Hickman, who has since become a master herself in the Traditional Arts Apprenticeship Program with the kloppelei tradition, praised Mrs. Robbin’s teaching methods, fondly remembering her “tremendous amount of patience.” Mrs. Robbins adapted her teaching methods to suit the needs of the student; in Mrs. Hickman’s case, she focused on demonstrating the techniques while Linda took down notes (to Mrs. Robbins’ amusement and delight).

Mrs. Robbins’ legacy continues; whenever Mrs. Hickman demonstrates the art form at festivals, she estimates that 90% of the people she sees talk about Mrs. Robbins. They were “so taken with her and her work,” Mrs. Hickman said.