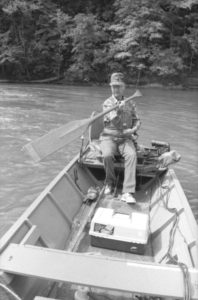 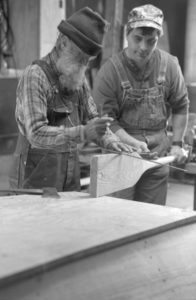 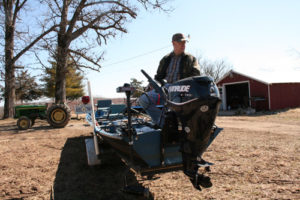 Cecil Murray is a self-described “river rat.” Born and raised in Doniphan, Missouri near the Current River, Mr. Murray has been involved in the building of johnboats and the carving of johnboat guide paddles since he was five years old. Johnboat building and paddle carving are a long-standing tradition in Mr. Murray’s family. He learned this work from his father, and most particularly, from his Uncle Ernest (Punk) Murray (also a TAAP master artist in johnboat paddle carving). Punk Murray’s particular method of making sturdy guide paddles is a closely guarded secret that Cecil Murray has shared with his family members and long-time fellow river rats and woodworkers.

Historically, long, low wooden johnboats were the norm on Ozark riverways, but since the 1940s, aluminum boats and mass-produced paddles have replaced handmade boats and paddles. Mr. Murray and his family continue to practice an art form that is both rare and endangered but very important to the Ozark riverways heritage.

In 2011, two-time apprentice Nathan Gordon laughingly described his excitement with Cecil Murray: “Well, I’ll tell you—I didn’t choose—Cecil chose me. Not that I wasn’t wanting to learn from him very badly. I was honored and excited when Cecil first asked me to apprentice under him in johnboat building and am very excited about learning paddle making too. Cecil is the leading expert and the master craftsman of this art.”

Mr. Murray’s many apprentices speak highly of his skill and abilities. When outside evaluator Alex Primm visited Cecil Murray and his apprentice Steve Cookson in June 1993, he noted “I could see that he was careful that all the arrangements for his boatbuilding were well planned and his tools showed a mix of traditional implements as well as modern labor-saving devices.”

Mr. Murray balances protecting his family’s traditional boat-building and sassafras paddle-carving style with the desire to pass on his knowledge and skill to those who will carry it on. In his 2010 TAAP application, Mr. Murray wrote, “I haven’t built a johnboat in several years and I thought maybe I would stop now and be done with it. But I started thinking—while I can do this still—and I am not as strong as I used to be—I would like to pass this on to Nathan. Just talking about the project with him has made me pretty enthusiastic. Maybe I got a couple more in me.”

Audio clip: Outside his Doniphan workshop, Cecil Murray describes the advantages of paddling and fishing from a wooden johnboat to MFAP director Dana Everts Boehm in May, 1996.