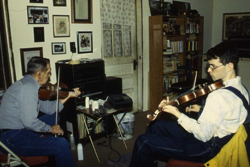 Master Bob Holt’s place in the Ava fiddling tradition is a prominent and proud one. In his 1989 application to the Traditional Arts Apprenticeship Program, he wrote about how he learned to play from uncles and other local fiddlers; his father also whistled tunes for his son to learn, and Bob Holt listened to recordings from the 20’s and 30’s. In his learning, Mr. Holt gained a deep appreciation for the relationship between old-time fiddle music and square dance in the Ava area. In another TAAP application, he wrote, “I grew up as the only fiddler in a large family of good dancers and probably learned as much about playing dances from them as I ever did from any fiddlers, and it has always been a great part of my life.”

Mr. Holt’s lessons with his apprentices emphasized how to cater to dancers, particularly by making the tunes “more danceable.” Mr. Holt stated, “The difficult thing is to teach someone else the rhythmic style of bowing and the speed which is required to make them acceptable to our dancers. My father once told me in explaining how to play for dances, ‘you have to give dancers a place to put their foot down.’ That says it all.” Mr. Holt recognized how important dancing is to a square dance fiddler’s education; in his work plan for his 2001 apprenticeship with David Scrivner, he wrote that along with one-on-one lessons, he would encourage Scrivner to keep on attending, playing, and dancing at local dances “to learn about the interrelationship between the music and the dance.”

The mutually satisfying relationship between master and apprentice was evidenced by the frequency with which he took on apprentices for a second year. Apprentice Venae Heier, whom Bob Holt had known “all her life,” wrote in 1988, “I have had the privilege of being an apprentice under Bob Holt’s instruction…Bob and I have developed a mutual understanding and respect for the art of fiddling.” Another apprentice, Mike Fraser, stated after his first year of apprenticeship, “I feel that I learned more about fiddle playing from Bob Holt in 16 lessons than I would have in 5 or 10 years doing it alone. Maybe never!”

TAAP outside evaluator Catherine Parce, in a 1990 site visit report, noted how Mr. Holt valued the relationship between music and his community. She stated that he “cares about the Ava music community and does all he can to help it thrive by teaching and by frequently playing for Saturday night dances held in the basement of the Ava Masonic Temple. “

Mr. Holt received a National Heritage Award from the National Endowment for the Arts in 1999.

Audio clip: Master Bob Holt surprises his apprentice Liz Amos with his decision to play “The Missouri Waltz” in an afternoon performance at the “Tuesdays at the Capitol“ series on April 14, 1998.