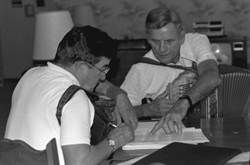 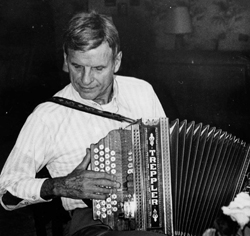 Arthur Treppler’s family immigrated to the United States from Austria and Hungary in the early 1900’s. He remembered of his youth that “every ‘fun occasion’ in his community in St. Louis included a button box band and dancing,” reported folklorist Donald Love, who observed Mr. Treppler’s work with his apprentice for the Missouri Folk Arts Program. He worked for 26 years as a quality assurance specialist in aviation for the U.S. Air Force and Navy; in his retirement, he devoted more of his time to playing, repairing and teaching the button box accordion.

Mr. Treppler learned to play the button box accordion in his teens from Louis Conrad, a friend of his parents and fellow immigrant. Mr. Treppler knew the old tunes by heart, and once he mastered the fingering, was able to play tunes by ear, though he also could read music. In his enjoyment of the instrument, Mr. Treppler co-founded the St. Louis Button Box Club and frequently played at St. Louis events like the Strassenfest and the Bevo Days festivals, celebrating the German heritage of the area. He performed music characteristic of the instrument—polkas, waltzes, and schottisches—traditional folk dances of his ancestors.

Mr. Treppler wrote about the button box with great fondness. In a 1988 publicity flier, Mr. Treppler stated, “Button accordions have the sweetest sound of any instrument; it is soothing to the central nervous system & pleasing to the ears.” He relied on the button box to cheer him when he felt down, and by teaching his art to apprentices he wanted to “retain the good sounds and happiness of this instrument.”

As a teacher, Mr. Treppler was characterized as kind, challenging, and praising, carefully keeping the techniques he was teaching just challenging enough to keep his apprentices engaged without frustrating the learner’s abilities. Mr. Treppler’s apprentice Erik Noltkamper wanted to learn from him because he was “the most knowledgeable in this area about the accordion itself, and he knows the old time songs. I want to learn the basics of the button box, and have a good foundation to keep learning.” A member of the Traditional Arts Apprenticeship Program’s review panel stated, “Every observer who has visited this master comments on his teaching ability. He is a leader in the Slovenian musical community as an entertainer and a teacher.”

Audio clip: Apprentice Alice Harfman and Art Treppler discuss the relative scarcity of button box players in the St. Louis area amidst the rising popularity of the instrument in the late 80’s-early 90’s. Interview with Dana Everts-Boehm in Bridgeton, Missouri.