It is with great pleasure that we continue with the roll out profiles of the 2020 Traditional Arts Apprenticeship Program (TAAP) teams of master artists and apprentices. Stay tuned; we have a few more profiles to come. [Be sure to click on hyperlinks for more of the story.]

James E. Price, PhD (Naylor, Mo.) is no stranger to the Missouri Folk Arts Program and its Traditional Arts Apprenticeship Program (TAAP). He taught his first apprentice Nick Heatherly in 1986, the project’s second year, followed closely by Bernard Allen (1987); Christopher Miller (1988); Debra Hunt (1989); and John Blair (1992). In fact, Doc Price is one of a very few TAAP master artists who have taught in the project five or more times, one of MFAP’s master teachers of the traditional arts. Twenty-eighty years later, Price returned to TAAP with a new apprentice–for him but not for TAAP. MFAP’s readers likely remember Steve Eikerman (Doniphan, Mo.), who apprenticed to master gigmaker Ray Joe Hastings in 2011. 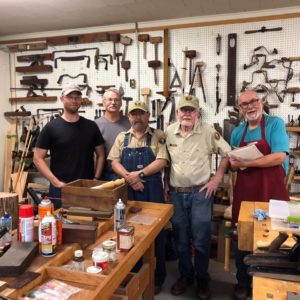 Price hails from a family “deeply rooted in six generations of Ozark farmers and woodworkers” in the Current River region. Those traditions were passed to him, especially via his father, the late Acel W. Price, who taught his son key local traditions like johnboat building, sassafras boat paddle and turkey call carving, among many, many others. From neighbors, Doc Price also picked up the knowledge to craft homes, barns, coffins, and wooden dinnerware, like bowls and spoons. With a PhD in anthropology and decades of archaeological research in eighteen southeast Missouri counties, he conveys his traditional knowledge into demonstrations and classes at Ozark National Scenic Riverways.

Doc Price and Steve Eikerman first got to know each other over a decade ago at the Tom Kennon Blacksmith Shop in Doniphan, where Eikerman–a welder by trade who learned woodworking as a child thanks to his dad–was learning to forge. About two years ago, Eikerman joined Price at the Ozark National Scenic Riverways Heritage Shop in Van Buren, Mo., where they work as VIPs (Volunteers in Parks) to demonstrate and teach traditional woodworking to park visitors. During that time, the master woodworker helped his now-apprentice to locate the necessary hand tools to stock his home workshop. This year, after a favorable review of their apprenticeship proposal, Price and Eikerman worked together intensively over the course of several months on a full-range of skills (from sharpening the tools to applying finishes) needed to complete twenty projects.

Once again, with Missouri’s stay-at-home orders earlier this spring, both MFAP staff and this TAAP team needed to cancel plans for a site visit by Folk Arts Specialist Deb Bailey; a public demonstration at Doniphan’s Heritage Days in April; as well as a demonstration and culminating event at the national park’s Heritage Day in June. The team did, however, complete its face-to-face lessons and continued to “meet” after via telephone. Similarly, Bailey has used the telephone to stay in contact with TAAP participants to learn about their outcomes. Staff was not surprised that Price and Eikerman, like all 2020 TAAP teams, found themselves continuing to practice their traditions from home.

A limb fell out of one of my pecan trees last week and when I went to cut it up and throw it on one of the brush piles I maintain for my cottontail rabbits, I saw a traditional Ozark three-legged stool in it. The limb had died and seasoned well up there in the tree. That is normal for pecan trees since they are self pruners and shed dead limbs throughout the year. The wood was quite hard and dense, exactly what I needed to make a stool like we had when I was a kid. The design of these stools is quite ingenious. A tree fork, three legs, and a board, combined, make a very sturdy stool that will last, “if hit don’t burn up or blow away”, as my grandma would say.

The gallery below includes just a few steps in the process of building the three-legged pecan stool from deadfall to functional. Price repurposed 120-year-old cypress barn wood for the durable seat. He was also quick to tell MFAP staff that Steve Eikerman built a similar stool during their apprenticeship. 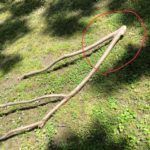 “This is part of the big limb that fell last week. [Price] focused on the fork in the red circle in this image.” Photo courtesy of James Price 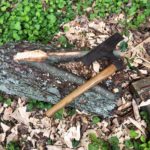 “[Price] sawed the fork away from the rest of the limb and used a hewing axe to better shape it.” Photo courtesy of James Price 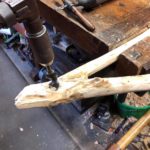 “Using a short doweling bit, [Price] bored a hole for a leg. The stool has splayed legs so the hole is angled.” Photo courtesy of James Price 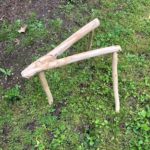 “This is the stool frame assembled.” Photo courtesy of James Price 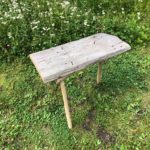 Almost finished . . . “Using old square nails, [Price] attached the seat to the frame. This design results in a very strong stool that will last many lifetimes.” Photo courtesy of James Price

Just this week, Dr. Clifford Murphy, the director of Folk & Traditional Arts, discussed the 2020 National Heritage Fellows–as well as the COVID-19 pandemic’s impact on artists and the field. In this podcast, Murphy paraphrased and expanded on something from Dan Sheehy, recipient of the 2015 Bess Lomax Hawes Heritage Fellowship:

I‘ve heard [him] say folk and traditional artists are maybe seen sometimes by people as being interested in the past but that in his experience (and I would say this is true for me, too) folk and traditional artists are people who are primarily concerned about the future and in seeing ideas and cultural continuity survive into subsequent generations and adapt into new scenarios.

We couldn’t agree more and look forward to seeing the future through the folk arts and folklife of apprentices like Steve Eikerman and the 2020 TAAP cohort.