It is with great pleasure that we continue with the roll out profiles of the 2020 Traditional Arts Apprenticeship Program (TAAP) teams of master artists and apprentices. Stay tuned for several updates in the next several days. [Be sure to click on hyperlinks for more of the story.]

Anyone who follows the Missouri Folk Arts Program and its Traditional Arts Apprenticeship Program should be familiar with master storyteller Loretta Washington (Florissant, Mo.), a 2003 apprentice to Dr. Gladys Caines Coggswell. Since then, Washington has taught as a master artist three times (2010, 2014, and 2020) and was the second featured Then & Now: Apprentice Journeys artist in 2017. 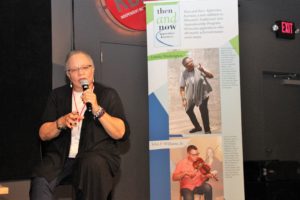 Washington is particularly adept at recalling and crafting what she refers to as “generational” stories. For her, these stories are grounded in her lived experiences in Missouri’s “Bootheel,” where she spent time living with extended family who sharecropped. 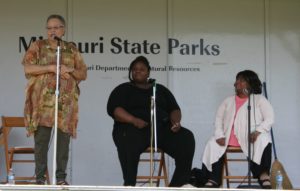 As one of the children too young to work in the fields, Washington spent a good deal of time with her great-grandmother Ellen, who she always called Mama. Washington has come to realize that Mama is the first from whom she learned the art of storytelling, as they sat on the front porch, worked and played around the house, or spent time in the vegetable garden. Washington’s beloved Mama was born in 1860 during slavery and died in 1953, just before young Loretta’s 8th birthday.

Mama Ellen shared age-old folktales and family stories, which Washington remembers and shares to this day: “To be the keeper of my family’s generational and traditional stories is a huge honor.” The Missouri Folklore Society Journal’s editor Adam Davis requested, then published a special issue devoted to a collection of Washington’s stories called My Corner of the Porch. A storyteller for more than twenty-five years, including performances with the St. Louis Storytelling Festival, Washington also shares stories from her return as an adolescent to segregation in metro St. Louis, as well as everyday glimpses of work, family, worship, and recreation from throughout her long life. 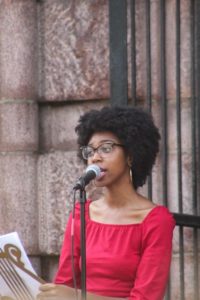 “I did find not find Brianna; she sought me out after looking for someone who could help her with storytelling. She read my bio, watched my videos, and then contacted me. She wanted to know if I would teach her more about storytelling. I asked her what did she want to know about storytelling, and she said, how to tell better stories to children. She told me that she had worked with children in a youth ministry and also in a relative’s daycare. We kept talking, and then she told me about her great-aunt, who was the family’s storyteller. Brianna said that she wanted to learn how to tell her family stories, just like her great-aunt did. Her face lit up when she told me how her aunt got up and held the attention everyone in the family.”

In the application they submitted for the apprenticeship program, Washington wrote: “I am excited and hopeful about working with [Brianna]; she has a humble spirit and willingness to learn.” Washington’s forecast held true.

She recently shared with MFAP staff that “Brianna is an excellent apprentice; she and I have already decided that we are going to continue working together [beyond the apprenticeship] when her schedule at Washington University permits.” Chandler has translated her storytelling skills, also, to the drama club at the university, auditioning for and winning a role in a Shakespeare play.

She recognizes that what she learns as a storyteller translates to other art forms, to advocacy, and even to her goal to attend law school in the future. Chandler has plans for a family story documentation project, hoping to learn more about her aunts and uncles–and to follow in her Aunt Priscilla’s footsteps, too. In the meantime, she intends to craft programs via storytelling in her position as a camp counselor with a local non-profit ministry.

Washington and Chandler were able to complete their apprenticeship this year, despite the social distancing cautions due to COVID-19. Sadly, we at MFAP were unable to travel to a lesson this spring to document them in action, and we had to cancel a performance that the team planned to perform for Washington’s neighbors at a senior independent living community. We hope to find an occasion soon, though, where this team can share their stories and passion for the generational stories that bind their families and their communities. For now, MFAP wishes Brianna all the best as she continues her studies–both at Washington University and with Loretta Washington.