“John P. Williams is an oldtime fiddler from Madison, Missouri who grew up deeply entrenched in the tradition of Missouri fiddling. John was a regular attendee of the Bethel Youth Fiddle Camp and apprenticed under Pete McMahan in the late 90’s as part of the Missouri Folk Arts Program. He studied under Missouri fiddlers Bob Holt, Vesta Johnson, Dwight Lamb, Taylor McBaine, Fred Stoneking, Johnny Bruce, Herman Johnson, and Charlie Walden. John is the youngest master artist in the Missouri Folk Arts Traditional Arts Apprenticeship Program and has been a master-artist four times . . . “ 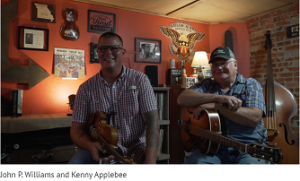 John P. Williams and Kenny Applebee pose for a photo during an interview Rachel Krause at Williams’ home. Photo by R. Krause

It is with great pleasure that we roll out profiles of the 2020 Traditional Arts Apprenticeship Program (TAAP) teams of master artists and apprentices. Our regular Show Me Folk blog readers should recognize both members…

We at MO Folk Arts are using the Show Me Folk blog, in these unusual times, to shine a bit more light on the state’s folk and traditional artists who make a living at their…

In the coming days, we at MO Folk Arts will use this blog to shine a bit more light on the state’s folk and traditional artists who make a living at their craft. We plan…