Back in 1973, a group based mostly in St. Louis, Missouri came together formally after a few years of programming traditional arts events and documenting regional traditions to establish the non-profit Missouri Friends of the Folk Arts [not to be confused with the Missouri Folk Arts Program]. In September 2018, on Labor Day weekend, the Friends came together for a reunion at the Röbller Vineyard in New Haven, Missouri. They had so much fun at the inaugural event that they organized a second reunion on September 1, 2019, meeting up again at Röbller Vineyard. 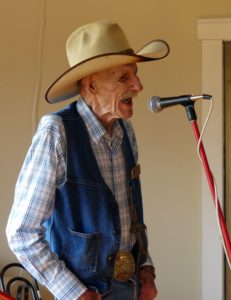 Here at the Missouri Folk Arts Program, we point to MFFA as a predecessor for which we have much admiration (and some envy). Below, find a quick overview of MFFA and its inaugural reunion from our friend and colleague Matt Meacham of the Illinois Humanities Council.

Then, head over to the Friends’ Facebook page, where you can see photos from both reunions, as well as take a trip back in time via illustrated stories posted over the last several months by Barry Bergey. Barry served as MFFA’s president before stints as Missouri’s first state folklorist and later his tenure in Folk & Traditional Arts at the National Endowment for the Arts. 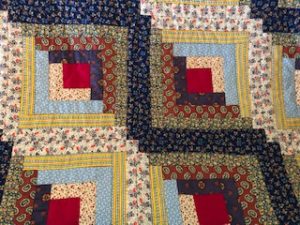 Lois Mueller often demonstrated quilting at Missouri Friends of the Folk Arts events, like the Frontier Folklife Festival. The reunions are held at Robbler Vineyard, founded by Lois and Robert Mueller. Lois’ quilts were on display at both MFFA reunions. Photo by Lisa L. Higgins

Excerpted from Matt Meacham’s Obscurity’s Magnet column that appeared in the January 3, 2019, edition of the County Journal, a weekly newspaper serving Randolph, Perry, and Jackson counties in Illinois

. . . Of the many cultural events that I was privileged to experience in 2018, one of the most memorable was a reunion of Missouri Friends of the Folk Arts (MFFA) in New Haven, between St. Louis and Jefferson City, in September.

My friends at the Missouri Folk Arts Program had other commitments, so they generously invited me to attend in their place. They encouraged me to write a reflection about it for their website, but I got absorbed in Illinois Humanities-related work and failed to follow through. I hope this column will compensate.

MFFA sprang from the efforts of university students to support folk music performances in St. Louis in the mid-1970s. Soon, the organization began documenting the work of traditional artists of all kinds from throughout Missouri and sharing it with the public through recordings, exhibitions, and the Frontier Folklife Festival.

Its legacy resonates today through its influences on the Missouri Folk Arts Program’s traditional arts apprenticeships; the Focal Point in Maplewood; KDHX radio in St. Louis; and musicians such as Leroy Pierson and the Ill-Mo Boys, who learned much of their knowledge from grassroots artists introduced to them by MFFA. Additionally, several of MFFA’s members, including Julia Olin and Berry Bergey, became national leaders in the public folklore field  . . .

A few links to learn more about MFFA, its members, and their fantastic work: