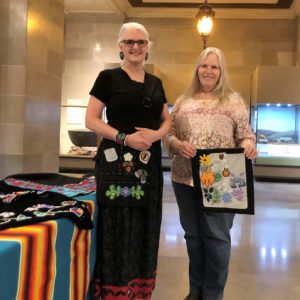 Since 2011, Peggy Kinder has taught in the Traditional Arts Apprenticeship Program three times helping her apprentices to strengthen their skills and knowledge of applique ribbonwork, shawl fringe tying, and now applique beadwork. Each is a tradition that Kinder observed and began learning at an early age. “My family and extended family were traditional people, and they instilled in me a deep love and respect for our heritage and our arts.” 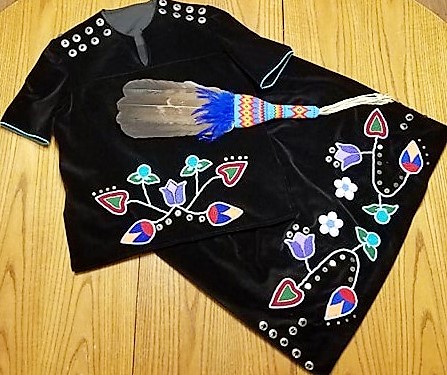 With their applique beadwork apprenticeship, Kinder is teaching Jarrar a very specific Woodland tradition, one that reflects the flora and fauna of the Potawatomis’ pre-removal home in the Great Lakes region. Kinder tells us that there was a time when “our people were no longer allowed access to the plants, roots, leaves, and berries that were part of our diet, used in traditional remedies and for other purposes. Our ancestors continued to bead [representations of] the plants to help preserve those images for future generations. It was important to remember where [our people] came from and the bounty of natural blessings from which they had been taken.”

The applique beadwork and ribbonwork, then, serve as memory objects for a traditional community long disconnected physically from their tribal home, due to the 1838 forced removal called the Trail of Death. In Cindy Jarrar, Kinder tells us she has found a “dedicated and motivated” apprentice who shares membership in the Citizen Potawatomi Nation and who understands the “importance of beading our traditional plants and flowers.” 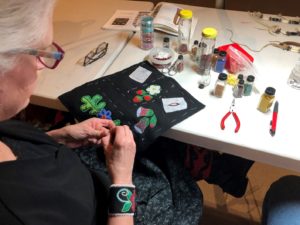 Peggy Kinder practices applique beadwork during a demonstration at the Missouri State Capitol in April 2019. Photo by Deborah A. Bailey

Unlike Kinder, Cindy Jarrar grew up disconnected from her Potawatomi traditions. Still, Jarrar found herself passionately drawn to beadwork, having obtained a loom-beaded necklace in the 1990s. That piece of jewelry sparked her imagination and a desire to learn more. Independently, she researched and practiced a variety of beading techniques. Upon meeting Peggy Kinder and participating in some of the master artist’s workshops, Jarrar began to immerse herself in her Potawatomi community and its beading traditions, and to engage her children and grandchildren as well.

She tells us that Kinder’s work is “absolutely beautiful, sought after by many people.” From the basics of applique beadwork and ribbonwork, Jarrar has gained some expertise in the heritage, function, and symbolism of the tribal affiliation she and Kinder share. She also has acquired enough knowledge and skill to consider innovations in the tradition, incorporating both the Woodlands plants of their ancestors and the Missouri plants of her childhood into intricately beaded work. 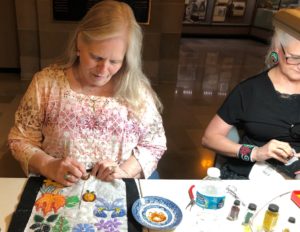 Cindy Jarrar (left) and Peggy Kinder work on applique beadwork samplers during Folk Arts at the Capitol in April 2019. Photo by Deborah A. Bailey

Together, Kinder and Jarrar have logged over 100 hours in the apprenticeship, where Jarrar created a beaded bandolier bag. Kinder has noted that, among its functions, Jarrar’s bag will serve as documentation or a “recording” of the traditional plantlore of their people. The apprentice plans to wear the beaded bag during upcoming Potawatomi ceremonies and powwows in Oklahoma and Kansas, immersing herself in their culture and sustaining it for future generations.