Once again, we are excited to roll out a new profile of a 2019 Traditional Arts Apprenticeship Program team.

Today, we are happy to introduce readers to master Colombian traditional dancer, choreographer, and costume designer Carmen Sofia Dence and and her two apprentices Sophia Francis and Ana Sofia Remolina. The Sofia-triunvirato!

Carmen Dence learned to dance as a child in her local barrio (neighborhood) in Barranquilla, Colombia from her mother, her aunt, local elders, and her peers. In her coastal state, the music and dances are imbued with indigenous, Spanish, and African influences. She is proud to share with others the vitality of dance in her hometown, the site of a spectacular four day extravagant carnaval that precedes the Lenten season. As a young adult, Carmen made her way from Colombia to the United States to pursue her university education in the sciences. She and her husband Joseph, also a scientist, then settled in St. Louis in the late seventies, where they pursued research and taught at Washington University. She says Cardinals baseball was also a compelling reason to stay.

The key way that Dence managed to keep her family close, while thousands of miles apart, was through traditional dance, which she brought with her to the U.S.–and sustained. She says: “From the time I was a young girl, I have always loved to dance. I learned from my mother and aunt, who both encouraged me. As I grew up, there were community elders who taught me, though not formally. Music and dance were ingrained in our lives during saints’ feast days, barrio celebrations, parties, weddings, and social gatherings. By observing, imitating, and participating, I learned the dances.” 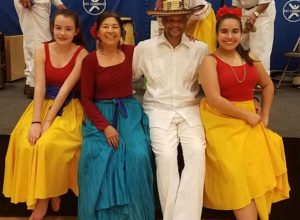 In metro St. Louis, good friends Ana Sofia Remolina (below, left) and Sophia Francis (below, right) actively started to learn  from Dence about five years ago. Now, they are two younger members of Grupo Atlántico, the dance troupe that Dence founded in 1995. She deems that they are committed, intermediate level dancers, who will take their passion for Colombian dance to the next level. 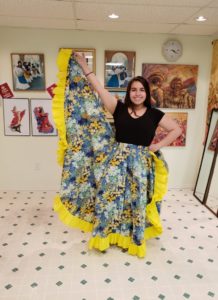 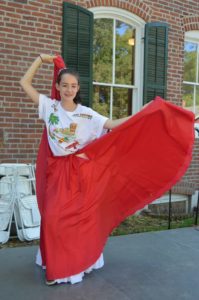 She tells us that her most recent apprentices seek “to reach deeper into the roots of our Latin-Caribbean folklore.” Ana Sofia follows in a family tradition; her mother actively participated in dances growing up in Colombia. Sophia, too, shares a love of dance with her mother and a motivation to immerse herself in her heritage through the art form. Sophia notes that stepping into Dence’s home studio helps her to transport herself to her roots and to “become closer to my heritage.” Both young women follow in their mothers’ footsteps, even performing with them at festivals and other cultural events in metro St. Louis. Ana Sofia tells us that in addition to learning more Colombian dances and their cultural contexts, she wants to “continue to share with others how intricate and beautiful my culture can be.” Sophia notes that she wants one day to give back to the next generation of Grupo Atlántico, teaching them to follow in her mentors’ footsteps.

Thanks to Sandra Arango Caro for capturing this short video of Carmen teaching Ana Sofia and Sophia.