We are excited to continue to roll out profiles of the 2019 Traditional Arts Apprenticeship Program teams of master artists and apprentices.

This week, we introduce readers to master Irish musician Turlach Boylan and and his most recent apprentice Molly McLaughlin. Boylan previously taught an Irish tin whistle apprenticeship in TAAP in 2008. This year, he is working with McLaughlin on traditional Irish flute. 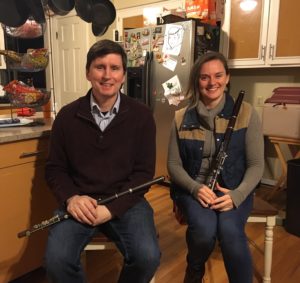 A “selfie” snapped by Molly McLaughlin at a February 2019 TAAP lesson at Turlach’s home in Lenexa, KS. Molly travels monthly from her home in KC, MO for lessons. Photo courtesy of Molly McLaughlin

Boylan himself learned to play Irish music as a teenager, studying with John Kennedy in Cullybackey, Antrim County, IE, as well as in community with his siblings and friends. In 1986, he won the All-Ireland contest for Senior Flute Slow Airs. After emigrating from Ireland, he has performed extensively on stages and at festivals in the greater KC area and in more than thirty states. Playing in community locally in jam sessions and more informal gatherings is still important to Boylan, who says “the music itself serves as a form of conversation and communication. For Irish emigrants and their descendants, it provides a link to their roots, lessening the disconnection with their past.”

This apprenticeship team shares Irish heritage, though McLaughlin’s is a bit more distant. Her Irish great-grandparents emigrated in the late 19th century. She discovered traditional Irish music via The Chieftans [after serious studies in classical flute] leading her to immerse herself in recordings, face-to-face lessons, community gatherings, and a residency in County Monaghan, IE. She has since traveled extensively steeping herself in Irish music in the U.S. and Ireland before settling into the Irish music community in Kansas City, where she performs and teaches.

When Boylan and McLaughlin meet for their three-hour lessons, they are working diligently on jigs, reels, and hornpipes. Boylan recognizes that McLaughlin is an accomplished apprentice with passion, experience, and “considerable technical gifts.” McLaughlin recognizes that Boylan is a rigorous teacher.

Beyond learning tunes, they are working to “polish” her traditional style with key ornamental techniques (with names like cranns, rolls, cuts, strikes, slides, and bounces). They acknowledge, too, that an important aspect of this apprenticeship is to immerse McLaughlin in a listening project–drawing from recordings that span one hundred years of the vibrant tradition. Ultimately, McLaughlin knows that Boylan has much to teach her; she says, “as a flutist, his tone is gorgeous, technique effortless, his ornamentation is beautiful and exciting, and his rhythm is solid as stone.” She expects to improve her style, technique, and repertoire, as well as to gain confidence.

Check out the video below, courtesy of Molly McLaughlin as recorded on her iPhone, to hear “Bride’s Favorite,” a traditional Irish jig that she has been polishing recently.

To learn more about Turlach Boylan and to hear him play in duo with Davey Mathias, visit their website here: http://davey.and.turlach.com/