Welcome back to Stories from the Field and a new post in our Show Me Folk blog. The blog is our dedicated space for staff, student workers, traditional artists, cultural experts, consultants, and community scholars to share photo essays on an array of topics in Missouri’s traditional arts and folklife.

We first met Faye Dant, a community scholar from Hannibal, Missouri, at a workshop MFAP organized in St. Louis in 2011. Since, then, Faye has invited us to Hannibal on several occasions to learn more about Hannibal arts and history, particularly African-American cultural contributions to the river city and its region. Retired from a successful career in human resources, Faye returned to a very active retirement in her hometown. She serves on the boards of the Marion County Historical Society, the Missouri Humanities Council, and the Missouri Association for Museums and Archives.  In 2011, she curated a highly successful exhibition that opened in the Hannibal History Museum. Ultimately, Faye opened Jim’s Journey: The Huck Finn Freedom Center in 2013 at the historic Welshman’s House next to the Hannibal Visitors Center. There, Faye installed the artifacts she collected for the earlier exhibition–and that collection continues to grow. At Jim’s Journey, Faye also shares the story of Mark Twain, the humanitarian, and the many African Americans who impacted his life and works. In 2017, the Missouri Alliance for Historic Preservation presented Faye and Joel Dant with a Legacy Award for their work through Jim’s Journey.

Jim’s Journey is often the site or the catalyst to celebrate and commemorate important events, including Juneteenth. Hannibal, Missouri will celebrate Juneteenth next week: June 19-21, 2018.

Read Faye’s story below to learn more about the tradition, its legends, and Hannibal’s event. You can also check out links at the end of the essay for additional Juneteenth celebrations in Missouri.

This spontaneous celebration of emancipation, “Juneteenth” originated in Galveston, Texas on June 19, 1865 – with the assistance of federal troops freedom came to the last 200,000 enslaved Africans. Freedom did not come easy, and it came more than two years after the signing of the Emancipation Proclamation. This day of mass emancipation has been a day of bittersweet celebration for many African Americans since.

Few people know the level of deceit owners went through to  avoid compliance to the Emancipation Proclamation; tens of thousands of slaveholders fled to Texas, hoping to extend the servitude of the enslaved in a process known as “refugeeing.” Owners came from neighboring states in droves, believing that their slave property would be safe in Texas. After all, it was the last frontier, where men, women and children could still be bought and sold. Although estimates vary widely, historians believe that after 1863 between 50,000 and 150,000 refugeed slaves, were brought to Texas. [Visit Jim’s Journey to learn about Harre Quarles, a Texas refugee who had been brought from Missouri.]

Thousands of miles east and months earlier, the Missouri State Convention delegates passed the 1865 Emancipation Proclamation Ordinance. Because Lincoln’s 1863 Emancipation Proclamation did not apply to loyal slave states, Missouri became the first slave state to free its slaves — more than 114,000 men, women, and children. Newly-freed slave responses ranged from exhilaration and celebration to incredulity and fear. The fears proved justified as nearly 25% died in the first 5 years – of homelessness, starvation and disease.

Well before the Missouri’s founding in 1821, the first Black residents were enslaved Africans, contributing to the bottom line and the growth of this great state. The life of the enslaved was brutal, replete with long hours of hard labor and very harsh laws that regulated the slave’s life from the cradle to the grave. Here is a Slave Sale poster you can see at Jim’s Journey,  much to behold. I was most outdone by the “guarantee” that you are purchasing a slave for life. 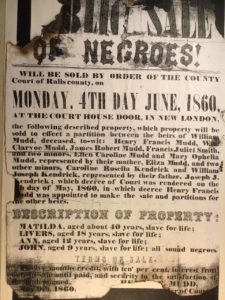 Missouri ‘s first Juneteenth Celebration was recognized as Jubilee Day, the 11th of June 1865 when thousands of Missourians were freed. Now in their 21st year of celebrations, Hannibal residents can thank many community-minded folks for continuing the  traditional Juneteenth celebration. Founder, Marsha Mayfield says “this year will mark 21 years of observance and celebration of freedom. The first organizer, PYRFEECT, a local not-for-profit, has been dissolved, but our mission of educating/uplifting/serving youth is needed now more than ever”.

Hannibals’ 2018 calendar of events, all free and open to the public:

Jubilee Day Our Music/Our Roots. A musical journey teaching you how sacred African/African American music and traditions influenced our community and our country. FREE REFRESHMENTS! 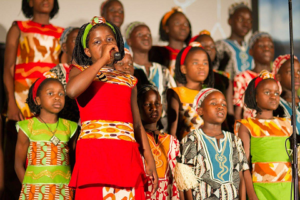 The WATOTO Church children’s choir from Uganda performs a blend of native African rhythms, contemporary gospel music, and creative dance. Jim’s Journey will sponsor a reception following the program, giving everyone an opportunity for fellowship and to celebrate this children’s ministry.

Music Under the Stars, a weekly free summer concert sponsored by the Mark Twain Museum. This not-to-be- missed performance will feature  favorites with a jazz twist by Hannibal icon Bill Morrison and son, Marty Morrison, on drums. Food Vendor – The Salvation Army. Jim’s Journey will be working alongside them providing refreshments at this family oriented event.

Jim’s Journey: The Huck Finn Freedom Center highlights the courage and accomplishments of local African Americans by giving dignity to these nameless, invisible ancestors who labored as slaves to help build this community.