Welcome back to Stories from the Field and a new post in our Show Me Folk blog. The blog is our dedicated space for staff, student workers, traditional artists, cultural experts, consultants, and community scholars to share photo essays on an array of topics in Missouri’s traditional arts and folklife.

Today’s blogger is Deloris Gray Wood of Salem, Mo., an amazing community scholar and journalist who is one of the busiest volunteers in the state, if not beyond. Deloris is President of the Missouri Chapter of the National Trail of Tears Association and a delegate to the National Trail of Tears Association. Also president of the Dent County Historical Society, Deloris has educated Missouri Folk Arts staff about the Gibson family basket makers. Deloris and her mother own an extensive collection of these Missouri baskets, prized possessions that they purchased directly from the family’s workshop once set up in Salem’s old Barad Lingerie factory.

In her role with the Trail of Tears Association, Deloris annually provides local support to an amazing educational project–the Cherokee Nation’s Remember the Removal bike ride. Following is Deloris’s firsthand account of the 2017 ride’s June 15, 2017 stops along the Trail of Tears in Missouri. The 2018 riders return in the upcoming days for the Missouri portion of their ride.

In 1838-1839, Cherokees were rounded up and forced from their homes in Alabama, Georgia, North Carolina, and Tennessee to free up land for white settlers. Taken to stockades and holding camps, the Cherokee awaited their removal to the Indian Nation, now Oklahoma. Approximately 16,000 Cherokees were rounded up and approximately 4,000 died as a result, suffering from exposure, disease, and starvation in the stockades, holding camps, on the Trail, and after arrival in their new homeland. The Cherokee were torn from their homeland, their homes, and businesses of their civilized and thriving society. They also lost folkways and lifeways related to the natural abundance of their homeland that could not be replaced in the new Cherokee Nation. The Trail of Tears National Historic Trail is one of 21 national parks selected to receive a 2017 Active Trails grant from the National Park Foundation, the official charity of America’s national parks. Grant funds support the Cherokee Nation’s Remember the Removal Project. Since 2008, the National Park Foundation has granted nearly $3.8 million through its Active Trails program. This event helps raise awareness in the community that the area has its own national parks and the Trail of Tears National Historic Trail. These are places to be active outdoors while connecting to American history.

On Thursday, June 15, 2017, the Cherokee Removal Bike Riders had a most eventful day in Crawford, Phelps, and Pulaski Counties in Missouri. In Crawford County, the aim was to ride in actual Trail of Tears Removal “ruts” to start their day on the Trail of Tears National Historic Trail. The night before the trail was checked out and was OK’d to do a trail segment re-tracement. All were fast asleep early the next morning when over a half inch of rain poured down on the ruts. Not knowing that much moisture had fallen, the plan for the day started, and mud plagued the riders until early afternoon when they had an opportunity to wash their bikes.

The bikers next scheduled stop was Rolla Public School’s Colonel John B. Wyman Elementary School. The schedule was tight. The Assembly was set for 10 a.m. Dr. Corey Ray, principal at Wyman, had the gym all organized, and the youngest students started to fill up the gym. Row by row, each grade filled the markings on the gym floor. The older students filled the bleachers, and teachers sat in chairs between both groups. As president of the Trail of Tears Association Missouri Chapter, national board member, and Partnership for the National Trails System Board Member, I was honored to start the assembly by asking the students to pretend that they were living in North Carolina, Georgia, Alabama, or Tennessee in 1838 and that they were fast asleep. Asking everyone to close their eyes, I then imitated a knock on the door and asked the students to open their eyes. I explained that when their father answered the knock at the door, the military was there to take them all to a holding pen or a fort. I then described how Cherokee families were forced to walk the 950 miles, walking alongside wagons to Indian Territory. I explained that the Cherokee bikers that students would meet that day were following that same route.

Dr. Aaron Zalis, Superintendent, welcomed everyone to Wyman Elementary. He was excited that so many students would get to see or talk to the Cherokee Bike Riders. Carol Clark, National Park Service, Intermountain Region, Santa Fe, NM, was excited that so many students were getting the experience of learning about the National Park Service’s Trail of Tears National Historic Trail. Carol gave the teachers an NPS Junior Ranger Activity sheet and NPS Trail of Tears stickers for each student. Representative Rocky Miller, Missouri House District 124 and a Cherokee citizen himself, presented a Proclamation from the Missouri House of Representatives to Will Chavez, one of the original participants in the Cherokee Removal Bike Ride in 1984. For this 2017 ride, Mr. Chavez was named the first Mentor Rider. He is also the assistant editor of the Cherokee Phoenix Newspaper in Tahlequah, the Cherokee Capitol in Oklahoma. 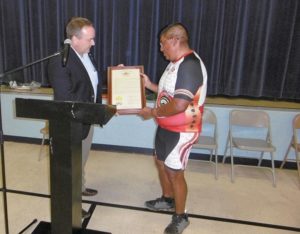 Highlights of the day happened when the Cherokee Bike riders would visit classrooms; magic happened. To see the faces on the students light up was priceless. On this day, when the bikers arrived at the elementary school, there was mud all over their bikes, their cycling shoes, and their riding uniforms. The 2017 Remember the Removal Bike Riders representing the Cherokee Nation in Tahlequah, Oklahoma, included cyclists: Gaya Pickup, Shelby Deal, Raven Girty and Macie Sullateskee, Mentor Rider Will Chavez, Hunter Scott, Ellic Miller, Breanna Anderson, Susie Q. Means-Worley, Brian Barlow, Skylar Vann, KenLea Henson and Trey Pritchett, and trainer Sarah Holcomb, as well as a Cherokee Marshall who escorted the team in his squad car. Additionally, the ride included cyclists from the Eastern Band of Cherokee from North Carolina: Zane Wachacha, Bo Taylor, Israel Rodriguez, Chavella Taylor, Haley Cooper, Taylor Wilnoty, Renissa McLaughlin and Sheyahshe Littledave. 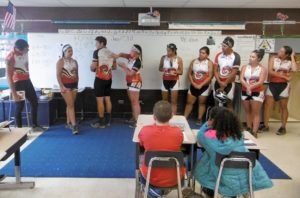 2017 Remember the Removal Riders explain the design of their jerseys to elementary school students. Photo courtesy of Deloris Gray Wood

In one classroom, the younger students wanted to stand in front of the bikers and get photos taken. In a couple of other classrooms, students were excited to learn about the differences between the Cherokee language and English. In another class of older students, the students were very intense as the riders’ uniforms, shoes, and custom bikes were described. The students’ curiosity made the classroom visits more intriguing, setting the stage for the bikers to describe the annual bicycle ride commemorating the forced removal of the Cherokee Nation from its homelands during the winter of 1838-39. The bike tour provides the opportunity for Cherokee Nation Citizens (ages 16-24 years of age) to travel along the Trail where their ancestors traveled.

After the assembly, the bikers washed off their bikes and shoes outside the school cafeteria before heading west, while some teased the Cherokee Marshall about the mud covering his vehicle. I then led the bikers who were in their vans that was pulling trailers from Wyman to Bandanna Barbecue’s parking lot. One Van was from the Cherokee Nation and the other van was from the Eastern Band Cherokees, Cherokee, NC. Local patrolmen Steve Davis, Missouri Highway Patrol and a Cherokee Citizen, joined the bikers at the parking lot where the bikers resumed their ride, as the traffic in Rolla was very heavy. Patrol officer Davis led the bikers going up the hill and out of town where they faced the hot sunshine, heading toward Waynesville. It was such a very hot afternoon that this writer’s car overheated. After that stretch, the bikers had smooth sailing again.

Greeting the Bikers is our Missouri Trail of Tears Chapter tradition. I am honored annually to arrange the Rolla and Waynesville events. When the bikers arrived in Waynesville, just after four in the afternoon, more local dignitaries welcomed them. Waynesville Mayor Luge Hardman did her traditional “Meet and Greet Ceremony,” gave a welcome, and presented each biker with a Route 66 lapel pin. Majority Whip of the Missouri State Legislature Steve Lynch gave a welcome to Missouri, noting how much he enjoys meeting the bikers each year.  I then asked each biker to himself or herself so the news media could interview them later and so the people in the crowd could identify those from Oklahoma and those from North Carolina. For the bikers, in addition to the ceremony, they relish a dip in Roubidoux Creek, another tradition during the mid-June portion of the ride. City Police escort the riders with siren going to Roubidoux Creek at Laughlin Park, also an official interpretive and memorial stop on the Trail of Tears. Our day’s activities ended with the Missouri Chapter Trail of Tears Association treating the bikers and supporting staff to dinner at Hoppers in downtown Waynesville, blessed by Rep. Lynch. 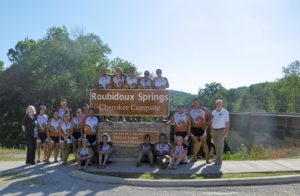 On a personal note, I will add that I was honored to be invited by Marvel Welch, a support van driver and member of the Eastern Band of Cherokee, to sit at the bikers’ table during dinner, a first, as I usually sit with Mayor Hardman and others. I sat next to Welch’s daughter Chi Shipman, who provided communications for the ride, across from the youngest biker and from Breanna Anderson, who had just graduated from the University of Tulsa (my alma mater) and entered medical school. Our table also included a representative of the Cherokee Nation Education Services, which organizes the Cherokee Removal Bike Ride each year. What a treat it was to listen to that dinner conversation.

After dinner, I was blown away as, one by one, the riders lined up behind our table and each hugged me while I was still seated. They were thanking me for making the day so special, for all my hard work in planning, and for dinner. Others thanked me for the opportunity to meet with the students at Wyman. To say the least, I was stunned. In years past, I was thanked, but the hugs and a few kisses were too much. Tears started to flow. On my way home, I called fellow Missouri Chapter board member Dr. William ‘Bill’ Ambrose to tell him all about the day, including how I was overcome with tears at the end. Dr. Bill, his wife Becky, and Rep. Miller made sure that the Missouri Chapter treated the riders to that dinner at Hoppers. We look forward to doing it all again next year.