A CELEBRATION OF ORAL HISTORY AND DOCUMENTATION OF TRADITIONS IN THE RURAL OZARKS, BY SASHA DAUCUS

Welcome back to Stories from the Field and the latest post in our Show Me Folk blog, a dedicated space for staff, student workers, traditional artists, cultural experts, consultants, and community scholars to share photo essays on an array of topics in Missouri’s traditional arts and folklife.

We are excited to welcome Sasha Daucus, a new guest blogger, in Doniphan, Missouri. Sasha is a professional herbalist, a retired midwife, and an Avatar Master who has lived and worked in the Missouri Ozarks for the past forty years. She also has an interest in the value of the arts in creating a beacon of hope during challenging times. About ten years ago, Folklorist Matt Meacham taught a series of community scholar workshops in south central Missouri, and Sasha actively participated. More recently, she helped to coordinate a weekend of oral history and traditional arts documentation events at Doniphan’s Community Center, in conjunction with her ongoing recovery activities after the 2017 flood in Ripley County and the region.

A CELEBRATION OF ORAL HISTORY

AND DOCUMENTATION OF TRADITIONS

What turned into a grand celebration April 27-28, 2018 of the value of oral history, began with the discovery of a hidden gem of a family story. In a casual conversation with a friend from Doniphan, where I live, I learned that her family had lived here for eight generations. “We don’t make a big deal about it because our ancestor who settled here was a Yankee, and that was part of what led to the burning of the Doniphan Courthouse during the Civil War,” she told me. “But my grandmother is a wonderful storyteller, and she loves to tell us our family history.” Something in me shifted when I heard her story. Yes, I’d known that the Doniphan Court House had burned during the Civil War (not just once, but twice—once for each side of the conflict), but in that moment of sharing, history came alive and relevant to me.

“Shared stories can transform a community,” Meredith Martin-Moats told me a few months before she lead documentation training at the Doniphan Community Center on April 28.  “Ask yourself: ‘What are we proud of? What could we do better?’ Collecting and sharing those stories can help you preserve the good stuff and improve where things could be better.” But I’m getting ahead of my story. 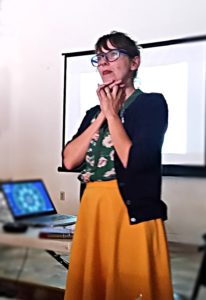 Meredith Martin-Moats listens closely to a question from a participant at the Oral History Training Workshop, in Doniphan, MO, Ripley County. Photo by Sasha Daucus

Back when my friend first told me about her family history in Ripley County, my eyes lit up. “We have to get those stories collected,” I told her, “and I know just the way. We’ll get you trained as a community scholar through the Missouri Folk Arts Program.” Missouri’s Community Scholar Program is a network made up of local experts, many of them self-taught who know their local counties and are able to tap into stories that would otherwise be unknown and unheard. Over the course of several years, the Missouri Folk Arts Program coordinated a series of workshops and events to develop and strengthen that network.

Ten years ago, I received similar training, and I loved it. The stories I collected from liberal homesteading families in the Ozarks had transformed that community, of which I am a part. Although I haven’t worked on an oral history project for several years, one of the other students in that class, Sarah Denton has continued to participate. When I contacted Sarah, she put me in touch with Lisa Higgins, director of the Missouri Folk Arts Program, who Sarah has worked with on artist surveys. “Sure, we can do a Community Scholar training in Ripley County,” said Lisa.  With those words, we were off! In collaboration with Julie Braschler of the Ripley County Historical Society, we began to plan. Julie was a wonderful collaborator. Like the creation of a stone soup, what started out in my mind as a small training to bring a few people up-to-speed on collecting oral history, turned into a full-scale celebration of oral history and traditional arts, with three events over the course of two days. The timing of the training also coincided with the anniversary of the epic spring floods in southern Missouri. Doniphan was hit hard by those floods last year. Now, at this potent time, it felt especially valuable to affirm our existence as a community with deep roots, and a unique history and culture. 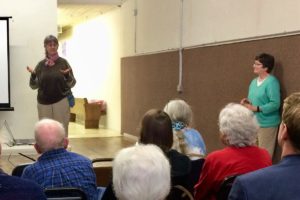 The first event of the weekend was on Friday evening, April 27. Susan Young, the outreach coordinator at Shiloh Museum of Ozark History in Springdale, Arkansas, shared her amazing presentation “Good Times and Sorrow: An Oral History Presentation.” Susan shared the stories of people who’ve lived their lives in the rural Ozarks of northwest Arkansas, stories she collected in face-to-face interviews and transcribed. Later, Susan curated an exhibition based on those stories with  accompanying photos and artifacts. “It is my most popular program,” says Susan. “It resonates with people.” We had a large turnout for the presentation and strong positive feedback. To our surprise, we realized that five previous participants in the Traditional Arts Apprenticeship Program from the region happened to be in the audience! 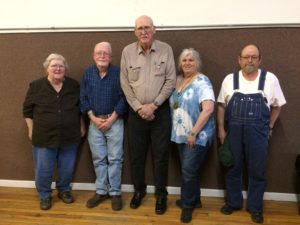 Susan’s presentation warmed us up for the next day’s event. In the vivid light of a bright spring morning, there was a special sense of heightened awareness. The group who gathered was lively and large. The training was led by Meredith Martin-Moats, a professional folklorist, radio producer and organizer. She is the founder of McElroy House, a center for oral history, folk life, and community action in semi-rural central Arkansas. Coming from a storytelling family herself, Meredith was articulate on the use of oral history in creating a healthy community. She skillfully provided a strong introduction and resources to move forward. She encouraged participants to begin articulating some steps on projects that interested them, so that seeds planted began to sprout. 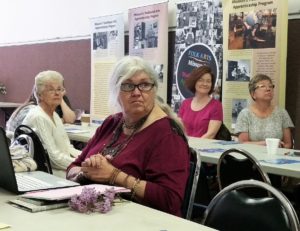 When the training ended, we still had one more special event, an interview by Deb Bailey of MFAP of master gig maker Ray Joe Hastings, part of the Then and Now: Apprentice Journeys initiative to showcase apprentices who ultimately achieved master artist status in the Traditional Arts Apprenticeship Program. Ray Joe Hastings learned gig making from master blacksmith Paul Martin. Since then, Ray Joe has taught three apprentices. One of those, Steve Eikerman was also able to attend the oral history celebration on April 28.  Not recorded as part of the interview, but a humorous side note to the apprenticeship program, Steve Eikerman related how Ray Joe tricked and charmed him into becoming a gig maker. Steve was already a blacksmith, and Ray Joe says he is a “natural.” Not just a great gig maker, but also a great storyteller, Ray Joe told stories that highlight the skill and strength needed for gig making and the hours of practice it takes to achieve mastery.  At the end of the interview, Ray Joe presented Lisa and Deb each one of his own hand made gigs.

The entire weekend was a gift that our community intends to pay forward. I’ve already begun the process of collecting my friend’s story, and I know other projects related to the flood are also in progress. 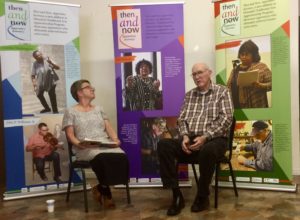 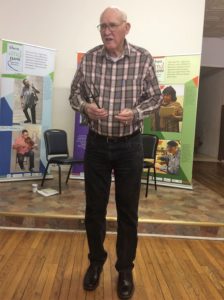