In April 2016 at the Missouri Folk Arts Program office, John Williams of Madison, Mo. shared his experiences as an apprentice in the Traditional Arts Apprenticeship Program to the late Pete McMahan in the 1990s.

Almost two decades later, John took on his own apprentice, Bob Cathey. Since the video was recorded, John has also mentored Jessie Perrigo and now Sophie Cunningham, teaching the tunes and techniques of a regional Missouri fiddle style. 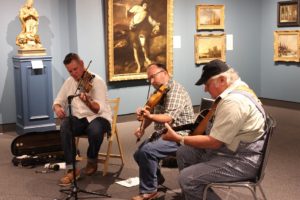 John Williams, Bob Cathey, and Kenny Applebee perform at the Museum of Art and Archaeology in Columbia, April 2016.

We hope you enjoy this video, excerpted and edited from the longer interview by Folklorist and Videographer Darcy Holtgrave, PhD.