Then and Now: Apprentice Journeys on YouTube with storyteller Loretta Washington

We’re happy to announce that we’ve launched a Missouri Folk Arts Program YouTube channel, one where we will post occasional videos from the field.

In May 2016, Jackson Medel filmed Then and Now: Apprentice Journeys with storyteller Loretta Washington at The Stage at KDHX in St. Louis, Mo. Watch the video here: https://www.youtube.com/watch?v=QUFkWomr7IA

During the annual St. Louis Storytelling Festival, MFAP director Lisa Higgins interviewed Ms. Washington about her experiences as an apprentice of Gladys Caines Coggswell, as well as about Washington’s own experiences when she reached master artist status and led her own apprenticeships. We hope you enjoy this video, edited from the event. 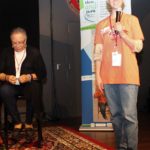 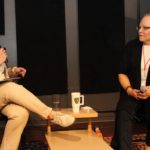 Lisa Higgins asks Loretta Washington about her experiences as an apprentice. 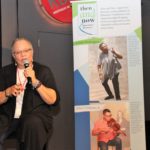 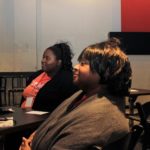 Photos by Deborah A. Bailey.

Then and Now: Apprentice Journeys is a new component of the Traditional Arts Apprenticeship Program, funded with an Art Works grant from the National Endowment for the Arts, as well as with support for the Missouri Arts Council (a state agency), the Museum of Art and Archaeology at the University of Missouri.