With a heavy heart, we share that old-time North Missouri fiddler John T. White of Hallsville died on Saturday, August 12, 2017. Born in Ethel, Mo., in Macon County, John White told our Folk Arts Specialist Deborah Bailey that he first learned fiddle from his family; his mother, father, and grandfather were all accomplished fiddlers. In 2004, John said: “Most of my early experience was in Shelby, Macon, and Monroe counties playing for square dances. I have played in barn lofts, on flatbed trucks parked on the street, in school houses, at fair grounds, in churches, and community centers to name a few. I can remember playing for 4-H square dances in 1949, so I guess that I have been playing for 55 years, minus 3 years when I was in the U.S. Army.”

More recently, John played for Mid-Missouri Traditional Dancers events, Columbia’s annual Heritage Festival, and Centrum’s 2017 Fiddle Tunes Festival at Port Townsend, WA, among others. John was also a long-time master instructor at the annual Bethel Fiddle Camp in Shelby County, Mo., where camp coordinators noted that he was “an exceptional instructor who inspires and motivates young musicians to do their best.”

At the Missouri Folk Arts Program, we got to know John even better after the Traditional Arts Apprenticeship Program review panel selected John and his apprentice Jordan Wax for the 2005 program. We later called on John a few times to play at events we helped coordinate, from a one-off Tiger Jam, featuring Mizzou students, faculty, and staff (John worked as an agricultural engineer at the University of Missouri until his retirement in 2005) to events for the Museum of Art and Archaeology and the Missouri Association of Community Arts Agencies.

In mid-Missouri, John and Betty White are best known and widely admired for organizing the Hallsville Music Jam, Potluck Dinner, and Square Dance on the second Saturday of each month at the local community center, an opportunity to play in the tradition that John knew best: “Our music is more directed toward playing for traditional dancers than for a listening audience. We tend to regard the fiddler as an accessory to the caller and dancers who are the main attraction and the reason for fiddling in the first place.” Like clockwork each year, John and Betty reserved and organized twelve “Second Saturday” events, and like clockwork each month, John sent out reminders to an extensive mailing list. The jam starts at 4:00 p.m. Dinner is available from 6:00-7:00 p.m. And, dancing starts immediately after and lasts until 10:30. John and Betty have made sure the event is always family- and newcomer-friendly.

We’re lucky that due to the hard work of some fellow musicians, we can still hear John play (click on title links to open in a new window):

We send our heartfelt condolences to Betty White, their children, and grandchildren; John’s friends in the “Nine Mile Band;” at the Hallsville Jam, Dinner, and Dance; and Bethel Fiddle Camp; as well as many friends in Missouri and beyond. He is already dearly missed. Obituary and services available here: http://www.bachyager.com/notices/John-White 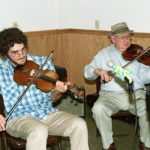 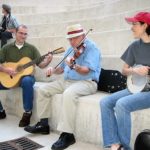 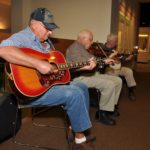 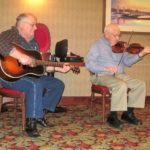 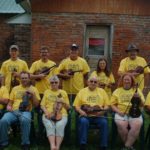