We are sad to learn that Mr. Clarence Schaffner passed away this week (October 2015). 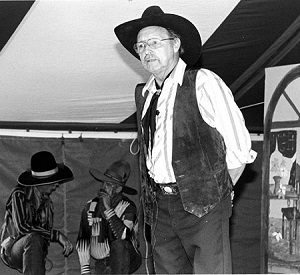 Among his many occupations, Mr. Schaffner was a cowboy poet. In the 1990s, he often performed and toured with “Missouri Performing Traditions,” a project once administered by the Missouri Folk Arts Program and funded by the Missouri Arts Council. While living in Missouri, Mr. Schaffner founded Star Hill Prairie Art Institute in Rock Port. He was also a featured performer along with Martin Bergin in the Smithsonian “River of Song” project for public radio and television.

Our sympathies to Mr. Schaffner’s family and friends. May he rest in peace.

You can find an obituary for Mr. Clarence Schaffner here: