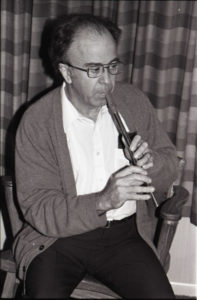 Patrick “P.J.” Gannon is an internationally known performer and teacher of traditional Irish music. With his wife Helen Gannon, herself a master artist in the Traditional Arts Apprenticeship Program in Irish step dance, he founded St. Louis Irish Arts, a branch of Comhaltas Ceoltóirí Éireann, (The Cultural Movement of Ireland) in 1973. Born in the Galway area of the West Coast of Ireland, Mr. Gannon moved to St. Louis in 1967 and eventually took a position as a professor of psychiatry at St. Louis University. Both his parents were accomplished singers and lilters, and as a boy, Mr. Gannon learned to sing, lilt, play harmonica, tin whistle and piano accordion.

Lilting is a way of singing that fills the function of an instrument for dancers. In the village where he was born, Mr. Gannon’s father was the favorite lilter and singer. In March, 1994, Mr. Gannon recalled, “The only entertainment may have been one instrument, a fiddle or a flute, sometimes no fiddle, no flute, so what they would have would be a singer. Now if that singer could lilt, then they could dance. So I learned lilting also. So the lilter would lilt and they would dance the reel, the hornpipe, and the jig, which are the three basic dances. The reel would be the group dancing, the jigs and the hornpipe if there were single dancers. And lilters were held in high esteem.”

In his work with his apprentices, Mr. Gannon reinforces the traditional relationship between music and dancing. In 1988, outside evaluator Eileen Flanagan noted, “One aim of whistle playing in Gannon’s school is to become good enough to play for dancers.  In Ireland many players of great reputation do not have the stamina and temperament to do it.  At this moment Meghan [O’Connor] does play for dancers as does Linda [Herndon].  This came about as a result of their apprenticeship.”

In 1994, Mr. Gannon mused, “The apprenticeship is really what pushes them on. When you’re doing an apprenticeship you really put your best behind it, because they’re going to be the role models for the others. The important thing is that they don’t hide it. So we bring them out in March and they perform to audiences and that’s where their confidence develops. In fact, they get so confident that they get very cheeky.”

According to Eileen Flanagan, “A no nonsense teacher, P.J. allows no idle chatter and focuses on music throughout the 40 minute lesson.  His teaching style is that of a parochial school teacher: he is in complete authority but not excessively rigid.”

Mr. Gannon’s apprentices appreciate his knowledge and skill as a teacher. Margaret Shannon noted in her application to apprentice in 1993,  “He is easy to learn from.  He understands all the stories and ways of being Irish.” In the same application, Sara Dobbs (eleven years old at the time) wrote, “I am very lucky to be able to study with Dr. Gannon.  He knows a lot and is a great teacher. My grandmother was born in Ireland and I am very proud of my Irish heritage.”

Audio clip: During an interview with MFAP staff at St. Louis Irish Arts in August 2006 prior to their program and performance at the Library of Congress in Washington, D.C., Mr. Gannon talks about his family’s musical traditions in Ireland during his childhood in the 1930s.