It is our honor to pay tribute to Patricia S. “Pat” Hight, a recent apprentice in the Traditional Arts Apprenticeship Program. We learned via her Facebook posts and a Caring Bridge online journal that over the last several months Pat sought treatment for cancer, then recently chose to enter hospice care, riding out her last days rocking on her porch and checking the late summer progress of her garden. She died yesterday at home. 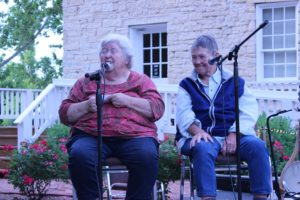 Pat Hight came to the Missouri Folk Arts Program recently, as an apprentice in 2017 and 2018 to Ozark master storyteller Marideth Sisco. Pat had the Ozark credentials, born in Greene County, Mo. to a mother from Izard County, Ar. and a father from Wright County, Mo. From them, she heard, witnessed, and kept many stories. She lived many of her own, too.  As a university student, Pat was active in the St. Louis-based group that evolved into Missouri Friends of the Folk Arts. She moved back to the rural Ozarks, became a fine potter, and continued to live a rich life. Pat apprenticed to Marideth in the Traditional Arts Apprenticeship Program (TAAP) to learn how to hone her life stories, and her families’ stories, for an audience, whether at a public event or in a circle of family and friends.

In June 2017, Pat and Marideth performed at the Missouri State Museum at its Backyard Concert Series near the Missouri River at Jefferson Landing, sharing the stage with master banjo player Van Colbert, his then-apprentice Cindy Parry, and brother Vernon Colbert on rhythm guitar. Their performance was a culmination of the year’s lessons for both Pat and Cindy; we could hear the growth both had achieved, compared to the work samples they submitted ten months earlier.

Pat and Marideth then applied for (and were awarded) a second apprenticeship for 2018. Second apprenticeships between the same master artist and the same apprentice are rare in TAAP; this team made a compelling case, and the panelists agreed. In their application, Marideth wrote “I want to help [Pat] find the confidence and curiosity to reach into memory for the wonderful store of history that she is beginning to discover within herself. We’re on that path. I’d like to help her to her destination.” We know that Pat reached that destination, telling stories at local events in West Plains, collecting her own stories as she floated local rivers (Marideth said Pat wore out a Zoom recorder), and writing the most exquisite Facebook ruminations about the garden. We would like to extend our love and light to many shared friends and to Pat’s family, especially Lois Reborne, their children, and grandchildren.

Our longtime friend (and Pat’s) Barry Bergey wrote a tribute to Pat on the Missouri Friends of the Folk Arts’ Facebook page this morning; it’s definitely worth reading.