Welcome back to Stories from the Field and a new post in our Show-Me Folk blog. The blog is our dedicated space for staff, student workers, traditional artists, cultural experts, consultants, and community scholars to share photo essays on an array of topics in Missouri’s traditional arts and folklife. 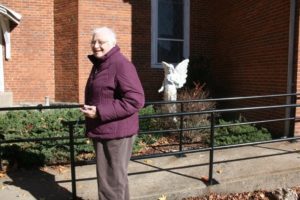 Back in 1985, Robert, my husband, and I were invited to visit with his cousin at his cottage on a lake near Ste. Genevieve, Missouri. We had traveled from Maryland, and we were looking forward to the peace and quiet of the country. Little did we know that a popular and traditional food in Ste. Genevieve would change our lives forever. That food was liver dumplings, a German dish famous in a town famous for its French roots.

Robert had spent three years stationed in Germany. When his cousin said that he wanted us to go eat at The Anvil Restaurant in Ste. Genevieve (famous for their liver dumplings), my husband’s eyes lit up, and he said, “Great, I love liver dumplings!” Of course, he was picturing those he had eaten in Germany, which were large, tennis ball-sized dumplings floating in beef broth.

When we arrived at 46 Third Street, of course we all ordered liver dumplings as a side to our meals. It turned out they were not large dumplings floating in broth but small grey noodle-like shapes covered with gravy. That did not stop my husband from eating all of his–and finishing mine. Those liver dumplings started his love affair with Ste. Genevieve; then, he found out The Anvil was for sale. Our son was graduating from college and wanted to go into business. The Anvil seemed like the perfect business for him. We talked it over with him when we returned to Maryland and made an offer that was accepted. 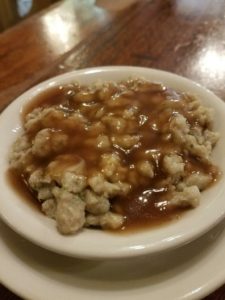 A sidedish of liver dumplings from The Anvil. Photo courtesy of Mary Peura

Liver dumplings, I learned, were a food staple in Ste. Genevieve, and we must make them available on The Anvil menu every day. This tradition was born when German immigrants came from Bavaria to the region in the 1830s to work in the salt mines near the town. In fact, I myself am often reminded of Bavaria when I have traveled the countryside south and west of Ste. Genevieve. 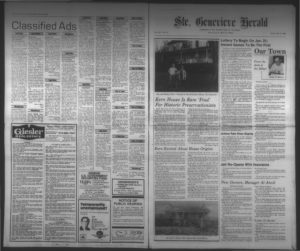 A story from the Ste. Genevieve Herald (lower right corner) announces the transfer of ownership to the Peura family in 1985. Photo courtesy of Mary Peura

Owning The Anvil, where the dish was a mainstay, meant having to learn how it was made. I had never seen a whole beef liver before then and soon found out that was where the traditional recipe started. The liver is ground raw, then two dozen eggs are added, along with fresh ground parsley, nutmeg, allspice, salt, pepper, and enough flour to make the dough stiff enough to form into a ball. This ball is cut then with a metal utensil over boiling chicken broth, which forms the dumplings. I quickly learned the local version are really shaped like kniffles (the German name) but were always called dumplings locally, and still are today.