IN THE AFTERMATH, THOMASVILLE, MISSOURI, BY MARIDETH SISCO

Welcome back to Stories from the Field and a new post in our Show-Me Folk blog. The blog is our dedicated space for staff, student workers, traditional artists, cultural experts, consultants, and community scholars to share photo essays on an array of topics in Missouri’s traditional arts and folklife.

Our latest blogger is Marideth Sisco, for whom many will need no introduction. For those who do, Marideth is a woman of many hats or many talents–or both. She is a singer, a storyteller, a journalist, and often she is all three at once and more. We at the Missouri Folk Arts Program originally met Marideth in her role on the board of the West Plains Council on the Arts and its annual Old-time Music, Ozark Folk Festival. We followed her podcast These Ozarks Hills on the NPR-affiliate KSMU. Then Marideth contributed to the independent film Winter’s Bone and organized the Blackberry Winter Band to tour in support of the film’s soundtrack. Around that same time, Marideth began to contribute to and participate in Missouri’s Community Scholars Network, as a presenter and participant, as well teaching her first apprentice, Suzanne Rayfield Chilton, in Missouri’s Traditional Arts Apprenticeship Program. And, since then, Marideth has joined the Missouri Arts Council’s Touring Performers. There’s more than that, we know, but we think you’d rather read what Marideth wrote–an ethnographic story about Thomasville, Missouri and clean up after the epic flood on April 29, 2017. It’s four months now since the flood, and two months since her visit, and we all continue to follow the story and support our fellow Missourians in Thomasville, West Plains, Van Buren, Doniphan, and their neighbors. Of course, we are also pulling for our neighbors in Texas and now Florida, as well as our neighbors in this hemisphere and its sisters as they wade through the waters. Below Marideth shows readers, with words and the photos of Claudia Dowling, a seasonal Thomasville resident, the impact on the everyday and the express life of Thomasville.

IN THE AFTERMATH, THOMASVILLE, MISSOURI

I don’t know what I was expecting to see. High water marks on the hillsides, maybe. But the grass has grown since then, and cleanup crews have been busy. It has been two months (June 2017) and something, after all, since the night of April 29 of this year when torrential rains filled that immensely long and wide Eleven Point River valley and raced into the town at its heart. They knew something would happen, but not this, routing people from their beds, townspeople racing through ankle and then knee-deep water to knock on doors. The rising waters chasing everyone to the high ground up at the cemetery, leaving everything they owned behind them.

It was there at the cemetery that they sheltered, waiting in the lightning and wind and relentless rain, for daylight, and to see how bad it was.

It was worse than they could have imagined. Whole houses gone. Windows and doors blown out of the rest. Interiors ravaged. The treasures and mementos of generations thrown out in the streets, in the trees, far downstream. Lost.

I wondered at what they must have felt when I heard they’d huddled there in the dark and driving rain, listening to what they could not see, the uprooting and ripping apart of trees, gardens, taking some of the homes from which they had barely escaped, gutting others of their contents, moving with terrifying force in a wall of water that reached seven feet high, valley wide. But I wasn’t here to ask them. Who, after all, would want to bring those memories back to the present. Instead, I came to see if anything was left. My first question as I turned the corner from Hwy. 160 in Oregon County and up Hwy. 99 across the broad valley toward the village: Where could enough water to fill this valley have come from?

Records would later show that the Thomasville area received 11 to 12 inches of rain in that 24-hour period. Upriver, at the headwaters of the federally designated Eleven Point Wild and Scenic River, the total rainfall was nearer 17 inches. From Willow Springs east and then south, it all came through Thomasville. Of course, the river had risen before. Of course, it had come out of its banks. But never like this.

Never in recorded history or before had such a thing happened. It was called a 500-year flood. But the people of Thomasville had roots that were deeper still.

Mind you, these were not ingénues to the kinds of things that might occur in life beside a river. Some of these families or their ancestors were there in that spot beside the river for countless generations before it was called “wild and scenic” by the National Park Service. Before there was even an Oregon County, or a Missouri, or an America, some of them.

Thomasville, or the village with an unremembered, un-English name that preceded it, was a village before a history of this place was written; its status as a gathering place stretched far back into the unrecorded past. The original village had been founded by members of an Osage tribe who had maintained a settlement there since sometime in the long ago. The first white settlers who wandered into the valley were fur trappers who stumbled onto the village in about 1801 or 1802 – no one is clear on the date, although the Oregon County Clerk’s office places the official founding of the town at 1803 — some years before there was a county clerk or such a county. The townspeople place the founding at 1809.

The Osage people who had occupied that site for ages were friendly; they found the pale-skinned, hairy-faced strangers interesting and so invited them to overwinter in the village while they did their trapping. Those fur trappers took their bounty back over the hills in spring to Jackson, a Mississippi River port, and they talked of this beautiful, friendly place they’d found. When they returned in the fall, they brought their families and other trappers along with them. And so it continued for some years, with more whites coming, some of them staying and building homes, until 1832, when soldiers came and made the Osage move off west into Oklahoma.

Many years later, when a group of Thomasville residents gathered at the town’s “Back Home” cafe to tell me of the town’s history, someone piped up at this point to say, “Well, they may have moved them out, but I don’t think they got all of them.” Puzzled by the remark, I looked up into the faces of entire family groups and saw their Osage eyes, Osage hairlines, Osage earlobes. They were all grinning, and I had to grin back, getting the joke. “No,” I said. “It doesn’t appear that they got them all.” 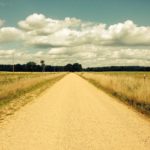 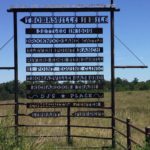 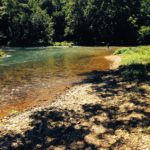 The Eleven Point River in its “ordinary” state 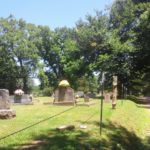 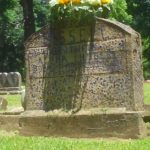 A traditionally-crafted tombstone, made of homemade cast concrete and adorned with broken bottles decorations and inscription. Brothers Alpha and Hubert Bissell, both deceased on July 25, 1934, rest here. 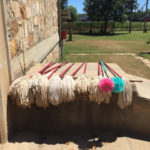 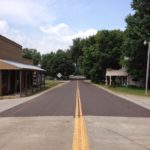 River’s Edge Cafe before the flood 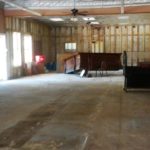 They told me many stories that day of that little frontier settlement that was the center of civilized life in the early Ozarks. But then came the railroads whose tracks were laid on more level ground along the ridges, and life and commerce were no longer bound to the river ports. West Plains (the village that grew on the plains west of Thomasville) would become the area’s largest city, for it was on a ridge, and the railroad passed through it.

At that point, at the turn of the 19th to the 20th century, Thomasville ceased to have a reason to exist. Except it was in an extraordinarily beautiful location, and some couldn’t bear to leave. Around that same time, as roads improved, the lavish grasslands of the valley were discovered by out-of-state investors, some of whom were lured to create working ranches, and build homes, and stay.

When paved roads arrived, the same judgment was made of the commercial value of the little village. No use for much of a store, or post office, or school when there was bigger and better within driving distance. Still, some hung on, and others from outside who tired of town living began to turn some of the old abandoned houses into summer homes.

From its very beginnings, Thomasville was isolated, and those who lived there had to make do with what they had or could make, and their stories ring with a peculiarly Ozarks brand of ingenuity. There was, for instance, the town’s first doctor who obtained a skeleton for his office by buying the body of a man convicted of murder from the man himself. The price? All the whiskey he could drink until the hanging. After he was hanged, the doctor “stored” the body in a porous, rock-lined coffin for a year on the river bottom, until aquatic life had cleaned it to the bare bones. Then he had it brought to his home, where he strung the bones back together with wires and hung it from a hook in the ceiling of his office.

That day in the cafe, locals also told of how they solved the lack of suitably hard rock for gravestones by burning limestone to make their own cement and decorating the hand-poured “stone” with chips of broken bottles before it hardened. They made do, they said.

It was these people, or the grands or great-grands of some of them, who were among those washed out of their beds April 29, routed at last from their ancestral homes. Those from the oldest families were among the ones who waited the night at the cemetery to see what they would have to return to come morning. It wasn’t much, and the local news media speculated that this time the village might be gone for good.

But it sure didn’t look that way when I arrived. True, I came late, after much debris clearing and pressure washing and other restoration was underway. But it wasn’t nearly as bad as I was expecting. Yes, some houses were gone. Some were in ruins or boarded up. Others had damage still visible. But above the birdsong and riffling water came the sounds of hammers and saws. There were still debris piles, but also pickup beds and trailers loaded with building materials. The scene held many remnants of sad stories, but among them were the busy hands and lofty notions of better days to come.

It’s a town that has been described as dying for more than a century now. But it sure isn’t dead yet. The building that once held the River’s Edge cafe is empty, gutted by the flood. But it’s still strong and square and cleared of all debris, waiting to be useful again, waiting with its neighbors, with those rebuilding, still willing to stay, to invest in an always uncertain future.

Thomasville, a remnant village of ancient age, full of the ghosts of ages, teetering on the edge of survival. But not a ghost town yet.