Master jazz saxophonist Ahmad Alaadeen died on August 15, 2010, and MFAP staff attended his funeral service at Tuesday, August 17 at 10 am at Watkins Brothers Memorial Chapel in Kansas City, Mo. Jazz Times published an obituary by Dawn DeBlaze at that time. 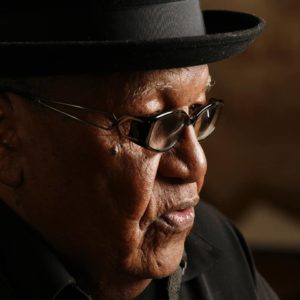 About eleven months later, on what would have been his seventy-seventh birthday, Sunday, July 24, 2011, MFAP director Lisa Higgins had the opportunity to attend a tribute to Alaadeen in Grandview, Missouri. The three hour program was designed to showcase Alaadeen’s extraordinary life, excellent artistry, profound love of the arts, enormous contributions to education, and his deep faith. During the event, Alaadeen’s wife Victoria Dunfee was presented with proclamations by Senator S. Kiki Curls on behalf of both the Missouri Senate and the Missouri House and with a posthumous award, the National Juneteenth Jazz Lifetime Achievement Award. The tribute was lead by Imam Salaam with contributions as well from Imam Hazim and Imam Muhammad.

A key focus in the tribute was to Alaadeen’s love of the arts. He once said “The arts are the human face of a nation.” Three gentleman shared works on canvas that were inspired by Alaadeen’s music. Lisa Higgins then told the audience of Alaadeen’s friends, family, and colleagues about his contributions to education, especially through Missouri Folk Arts Program projects, like the Traditional Arts Apprenticeship Program and the now-defunct Missouri Performing Traditions. While Alaadeen was celebrated for touring nationally and internationally, Higgins explained, Alaadeen also worked tirelessly as an educator and artist in his home state, performing beyond Kansas City in communities like West Plains, Jefferson City, Moberly, Kahoka, and Houston (in Texas County, Missouri).

The event closed with a concert of three amazing performances: 1) “Jazz-poet” Dan Jaffe performed two poems honoring Alaadeen with accompaniment by members of “Group 21;” 2) Jazz elder Luqman Hamza sang and played jazz standards on the piano; and 3) award-winning commercial jazz artist Najee flew in and performed with Group 21 and Hamza. When the afternoon wound down, all watched an earlier interview Alaadeen, available here: http://www.youtube.com/watch?v=d-3v8r8Fw8Y&feature=related. From the interview, you’ll get an idea of how irresistible the music of his neighborhood was, how disciplined Alaadeen was as a student, and what some of his earliest gigs were like.

Lisa Higgins concluded her presentation with this story:

Alaadeen took Ryan Stephens of Raytown as a apprentice in 2007 and 2008 (in the Traditional Arts Apprenticeship Program). Alaadeen noted that he taught private lessons to a “select number of students” and by that he meant that “if they are not totally committed [he didn’t] want to waste [his] time.” He said: “I am trying to pass on what I know in the way that I learned it and all the history and stories that go with it to the most dedicated students.” It is fairly rare that the apprenticeship program panel scores a second apprenticeship with the exact same team so highly. It’s not unheard of, but it is rare. Well, when Alaadeen and Ryan applied the first time, Ryan wrote (he was about 15 at the time): “If you look at Alaadeen, you can tell he’s a man of many talents. If you listen to his work, you can tell he’s very skillful at what he does. And his background and past makes him a wise mentor to follow.”

Ryan had to fill out a biographical form for the Missouri Folk Arts Program when he and Alaadeen were accepted into the program. Under “occupation” in 2007, Ryan wrote “student.” He was 15 and in high school. After working with Alaadeen more intensively in their dedicated apprenticeship for one year, in 2008, under “occupation”, Ryan wrote “artist.” In a nutshell, I think that says it all about Alaadeen’s influence as a teacher, an educator and a mentor.

Researchers who wish to learn and share more about Alaadeen, his life, and his contributions to the Kansas City jazz tradition will find a collection donated by Fanny Dunfee Alaadeen at the UMKC Libraries.