More sad news when we learned that Mitch Jayne passed away on August 2, 2010 in Columbia. Mitch was quite the community scholar and storyteller, though he was best known as a member of The Dillards (known to many as the Darling Family on “The Andy Griffith Show”). 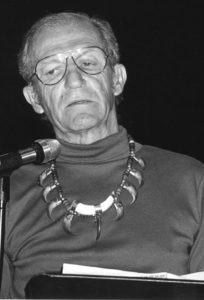 As a member of the Missouri Folk Arts Program’s former project Missouri Performing Traditions, Mr. Jayne often toured the state to share stories based in his life in the Ozarks. In a program for the 1995 Old Time Music, Ozark Heritage Festival in West Plains, MFAP staff wrote: Mitch Jayne taught in a one room school house in Salem for over 20 years. He paints the picture of the building that was central to home, hunting, civic duties, and recreation as well as education. An able historian and chronicler of community and language change, Jayne’s stories border on the hilarious at the same time being packed with the information about Ozark life and values. Jayne, after a period performing bluegrass music with The Dillards, returned to Missouri where he is active on the radion, as a public speaker, and contributed to the Missouri Conservationist.

You can find an obituary for Mitch Jayne here: